A candidate who has left or been dismissed from one of the Armed Forces NDA II training institutions due to disciplinary reasons is ineligible to apply.

In this article, we will be discussing the Physical Requirements and medical requirements for Admission to the National Defense Academy Guidelines.

Many suitable candidates are subsequently turned down for reasons related to their health. In order to avoid disappointment at the last moment, candidates are encouraged in their own best interests to have themselves medically tested before completing their NDA II Online applications 2014.

In order to expedite the completion of the medical examination done at the Military Hospital after being recommended at the SSB, candidates are also instructed to correct minor flaws or diseases.

Below is a list of a few of these common malformations and illnesses:

All civilian applicants for Union Public Service Commission positions in the armed forces are eligible to receive outpatient care from service providers at no cost to the government for any illnesses or injuries they suffer while taking the SSB examination. Additionally, they will be entitled to publicly funded inpatient care at a hospital’s Officers ward if the following conditions are met:

The provision of the Review Medical Board will be sent to candidates who were deemed unfit at the Appeal Medical Board.

The candidate must be in good physical and mental health and free from any illness or handicap that could prevent them from performing their military duties effectively.
There shouldn’t be any indications of a weak constitution, physical flaws, or underweight status. The applicant shouldn’t be obese or overweight.
157.5 cm is the minimum allowed height ( 162.5 cm for the Air Force ) The minimal height required for Gorkhas and people from the hills of India’s north-eastern regions, Garhwal and Kumaon, is 5 cm. Candidates from Lakshadweep may have their minimum acceptable height lowered by two centimetres.

Only the inner face of the forearm, from the inside of the elbow to the wrist, and the reverse side of the palm/back (dorsal) side of the hand / are permitted for permanent body tattoos. Candidates will not be allowed to move on in the selection process if they have permanent body tattoos on any other portion of their bodies. On a case-by-case basis, tribes with tattoos on their face or bodies in accordance with their prevailing customs and traditions will be allowed. For resolving such matters, Comdt Selection Centre shall be the appropriate authority.

A strong chest should be present. Chest circumference when expanded shouldn’t be less than 81 cm. After full inspiration, the minimum range of expansion should be 5 cm. A tape measure will be used to take the measurement, and it will be set such that its lower edge touches the nipple in front and its higher part touches the lower angle of the shoulder blades in the back. It is mandatory to get a chest X-ray, which will be used to rule out any chest diseases.

The bones and joints shouldn’t have any abnormalities in their growth or function.

Other than NDA medical requirements the prospective candidates are recommended to maintain good physical health by engaging in the following routine:

What is Lasik Surgery? Is it allowed in Indian Armed Forces?

Job opportunities in defence after 10th 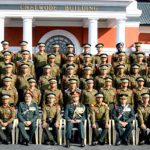 How to Become a Pilot in the Indian Air Force?