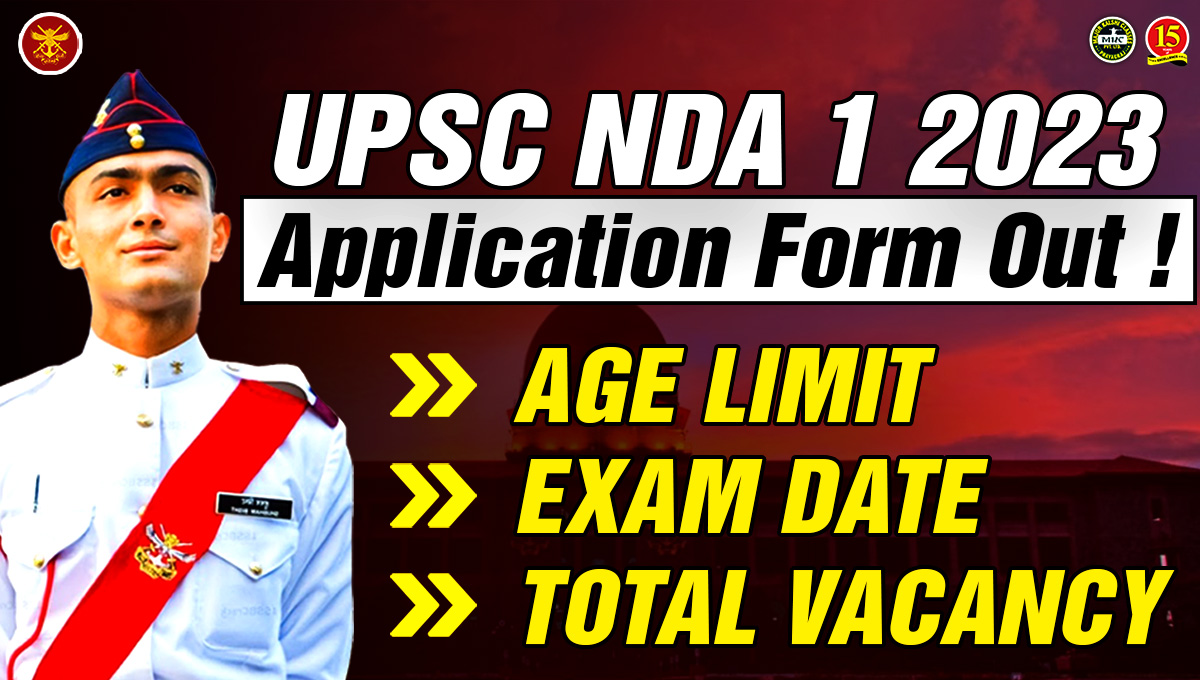 Union Public Service Commission conducts the NDA/NA exam twice a year. The NDA exam is conducted to select candidates after 10+2. They are provided training to become commissioned officers in the Indian Armed Forces. It is a national-level exam conducted in offline mode. NDA 1 2023 Notification with the syllabus and exam pattern has been released on the official website of the UPSC at upsc.gov.in.

Interested and eligible candidates can fill out the online NDA application forms by visiting the official website. The NDA exam comprises three stages and those who clear all the stages are only given admission to the National Defense Academy or the Naval Academy.

UPSC has released a short notice informing candidates that the last date to apply online for the NDA exam has been extended till 12th January 2023. Find the direct link to apply online in the article below.

The UPSC NDA 1 2023 Notification has the following notable points. The candidates can read the article below for further information.

The table below contains the NDA 1 2023 Tentative exam date and other important dates.

The candidates must fulfil the minimum eligibility criteria in terms of nationality, educational qualification, and age limit provided in the article below:

The candidates have the following eligibility in terms of nationality.

(i) a citizen of India, or
(ii) a subject of Nepal, or
(iii) a person of Indian origin who has migrated from Pakistan, Burma, Sri Lanka, and East African Countries of Kenya, Uganda, the United Republic of Tanzania, Zambia, Malawi, Zaire, and Ethiopia or Vietnam with the intention of permanently settling in
India.

The candidates must be between 16.5 to 19.5 years of age to appear for the NDA 1 2023 examination. Only unmarried male/female candidates born not earlier than 02nd July 2004 and not later than 1st July 2007 are eligible.

The table below contains the minimum educational qualification for the NDA 1 2023:

Candidates willing to apply online for NDA/NA 2023 can bookmark this page to get notified whenever the NDA 2023 online application form is released officially. We will update the direct application online link here.

How to Apply Online for the NDA exam?

The candidates can follow the steps below to apply online for the NDA exam:

The application fee is Rs. 100/- for Male (General and OBC) candidates. The fee is exempted for female candidates / SC / ST/ sons of JCO / ORS / NCO.

The NDA selection process consists of three major stages. They are as follows:

Although, the NDA 1 2023 Exam Pattern is provided below:

Hence, the NDA exam centres are allotted on a first come first serve basis. That means the candidates are given the exam centres as per the availability of the centres. The list of NDA exam cities is given below.

Now let us discuss some of the reasons why MKC is the Best NDA coaching in Allahabad.

They also prepare students for the CDS, MNS, AFCAT, TES Army Entry, and 10+2 B.Tech Navy Entry. Hence, some of the features that make MKC the best are as follows: