It is not new for the Nation if china and Pakistan are trying to enter into the Indian territory. A few days ago again the Indian Army and Chinese army are ready to have combat and the current situation very critical at the border. Here in this article, I am going to share with you the complete information about India and China Border Conflict, Army Conflict Between the Ind-China and will tell you what is actually going on over there. To get complete information about this, check the complete article below. I have shared all the information about this conflict and about the current situation at the border etc.

What is Indian China Border Conflict?:

A few days later, the Chinese Army confronted Indian soldiers again, this time at several other remote border points in the Himalayas, some more than a thousand miles apart. Since then both armies have rushed in thousands of reinforcements. Indian analysts say that China has beefed up its forces with dump trucks, excavators, troop carriers, artillery and armoured vehicles and that China is now occupying Indian territory.

No shots have been fired, as the de facto border code dictates, but the soldiers have fought with Stones, Woods and their hands in a handful of clashes. In these clashes, Many Indian Soldier is injured very badly and they are shifted to the Military Hospitals by the Air Ambulance. As per the Indian Analytic reports, the Chinese soldiers are also injured.

We do not have even have the idea that both countries are about to go for war. This is not happening for the first time when China has broken the rules and regulations of the International border lines. still, the Military Sources said that, In view of the current situation, China’s border defence troops have taken necessary measures to strengthen an on-the-spot response and control of border areas, resolutely safeguarding China’s sovereignty and security and maintaining peace and stability in border areas.

What Chinese Military Said on this Conflict:

As per the Chinese Military: The Galway Valley region is Chinese territory, and the local border control situation was very clear. The actions by the Indian side have seriously violated China and India’s agreements on border issues and India has been crossing the boundary line in the Galway Valley region and entering Chinese territory and violated China’s territorial sovereignty and harmed military relations between the two countries.

What Indian Military Said on this Conflict:

The Indian Military has said that all claimed by the Chinese military are fake.  The Chinese Military was trying to enter the Indian Territory and when the Front line soldiers stoped them at the line of control and they had handed to hand combat and got injured badly.

What is the Current Situation at the Indo-China Border conflict:

According to the source, the border troops of China and India will keep in touch with each other on the current situation through meetings and representations. China and India have experienced a 72days military standoff in Doklam in 2017. Since then, measures have been taken to avoid another similar major incident. The Political leader of both countries had two informal meetings and agreed both sides will continue to maintain peace and tranquillity in border areas and work on additional confidence-building measures through consultation.

This is all about the What is India China Border Conflict? or can also that  Army Conflict Between the Ind-China. All the candidate who wants to serve for the nation and wanted to clear the Defence examination can join Major Kalshi Classes, Here we have experienced faculty for all the subjects. For more inquiries, you can call us at 9696220022 and 9696330033 or go to our official website www.majorkalshiclasses.com. Thank you.  Army Conflict of India China.

What is hybrid Warfare in terms of China India Recent Clash 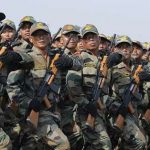 What is Responsibility of CDS (Chief of defence Staff)

How to prepare physics for NDA Exam