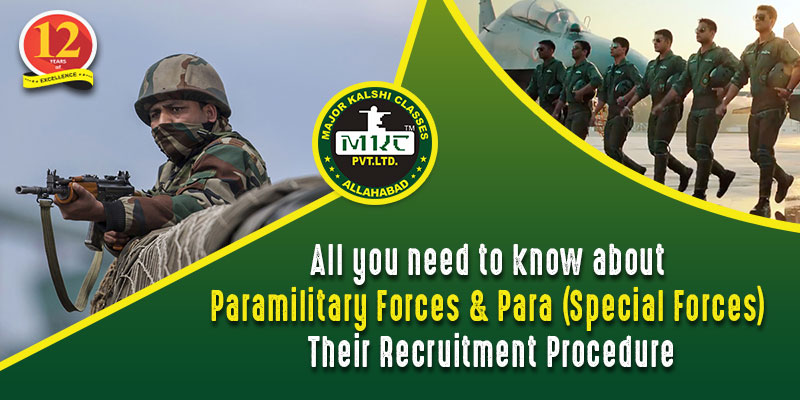 Paramilitary Forces is apparently a semi-militarized force whose institutional format, training, strategy, values, and functions are quite similar to those of professional military, but is directly not part of the Indian Armed Forces.

The two forces which fall under Paramilitary Forces are as follows

The roots of the Para (Special Forces) goes back to World War II, with the formation of the 50th Parachute Brigade in October 1941.

Features of the Paramilitary Forces and Para (Special Forces)

Parachute Regiment is the top-notch volunteer force of the Indian Army comprising of Para Military and Para (Special Force) Battalions. This regiment has the honour of being awarded the “Bravest of the Brave “distinction. They have already received plethora of awards like 08 Ashok Chakras, 11 Maha Vir Chakras, 21 Kirti Chakras, 106 Shaurya Chakras, 63 Vir Chakras and 491 Sena Medals and the list goes on.

At the time of operations, these regiments are assigned with the task which require very high standards of physical fitness and mental robustness. The Paratroopers have got ELITE Status because of the tough selection process, rigorous training and continuous deployment and preparation. They wear a maroon beret which distinguishes them from the rest of the Armed Forces.

The process to recruit motivated and energetic soldiers into Para regiment is as follows:

How to Join Navy After B.Tech

What is the training period of Territorial Army

How to Join Indian Army as a Doctor

5th Orientation Session – How to increase CONFIDENCE in your CHILD

All you need to know about Golden Globe Race