All you need to know about Golden Globe Race

The 2018 Golden Globe Race is a sailing race around the world which started on 1 July 2018 from Les Sables-d’Olonne, France. This is the 2nd edition of the race.

Its being conducted by Sir Robin Knox Johnston of the UK to commemorate 50 years of the world’s first solo non-stop circumnavigation undertaken by him in 1968 on board the Indian built boat, Suhaili.

The 1st edition was held in 1968. The current race features yachts similar to those used in 1968 with no modern technology allowed.

The 50th Anniversary edition of the first

For the 50th anniversary of the first race, there will be another Golden Globe Race in 2018. Entrants are limited to sailing similar yachts and equipment to what was available to Sir Robin in the original race. This race will start from Les Sables-d’Olonne on 1 July 2018. The prize purse has been confirmed as £75,000, with all sailors that finish before 15:25 on 22 April 2019 winning their entry fee back.

The race was sponsored by the British Sunday Times newspaper and was designed to capitalise on a number of individual round-the-world voyages which were already being planned by various sailors; for this reason, there were no qualification requirements, and competitors were offered the opportunity to join and permitted to start at any time between 1 June and 31 October 1968. The Golden Globe trophy was offered to the first person to complete an unassisted, non-stop single-handed circumnavigation of the world via the great capes, and a separate £5,000 prize was offered for the fastest single-handed circumnavigation.

Nine sailors started the race; four retired before leaving the Atlantic Ocean. Of the five remaining, Chay Blyth, who had set off with absolutely no sailing experience, sailed past the Cape of Good Hope before retiring; Nigel Tetley sank with 1,100 nautical miles to go while leading; Donald Crowhurst, who, in desperation, attempted to fake a round-the-world voyage to avoid financial ruin, began to show signs of mental illness, and then committed suicide; and Bernard Moitessier, who rejected the philosophy behind a commercialised competition, abandoned the race while in a strong position to win and kept sailing non-stop until he reached Tahiti after circling the globe one and a half times. Robin Knox-Johnston was the only entrant to complete the race, becoming the first person to sail single-handed and non-stop around the world. He was awarded both prizes, and later donated the £5,000 to a fund supporting Crowhurst’s family.

Entrants are limited to sailing similar yachts and equipment to what was available to Sir Robin Knox-Johnston in the original race in 1968–69. That means sailing without modern technology or benefit of satellite based navigation aids. Competitors could apply to have their class of boat approved, providing it was in accordance with the following rules:

Twenty-two classes were approved, with one exception to the rules made for a wood-epoxy Suhaili replica.

The race started on 1 July 2018 in Les Sables-d’Olonne and will lead around the world eastward, leaving Cape of Good Hope, Cape Leeuwin and Cape Horn to port. There will be several “film gates” along the route, where the skippers can be interviewed as they sail past without stopping and where they can pass over films and letters.

There are 18 entrants from 13 different countries who are going to participate in the race. Of those, six have chosen the class compliant but relatively modern Rustler 36. A further 17 had expressed interest but subsequently retired. 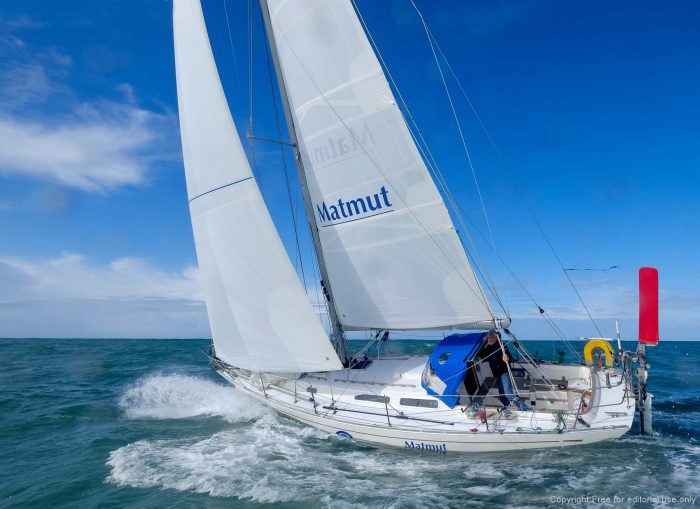 Naval officer Commander Abhilash Tomy is entrant from India and will sail around the world, solo and non-stop, as part of the race.

“The uniqueness of the race is that boat designs and technology newer than 1968 are not permitted. Hence, the use of Global Positioning System (GPS), satellite communication, navigational aids, etc are forbidden,” the Navy said in an official statement.

Tomy, one of India’s prominent sailors and a recipient of the Kirti Chakra, is the only participant from Asia.He has already covered 53,000 nautical miles under sail, including a solo non-stop circumnavigation of the globe in 2012-13 on board Indian Naval Sailing Vessel (INSV) Mhadei.