National Defence Academy (NDA) is one of the best ways to join, Indian Air force, Indian Army and Indian Navy due to the high demand in youths and now it is very hard to clear the cutoff nowadays. Here in this article, we will discuss the complete details of the NDA Cut off 2019 and NDA expected cutoff every year, NDA last year cutoffs, NDA cutoff 2018, etc.

In order to clear the cutoffs, NDA 2019 was a bit tough for the aspirants and cutoff was gone bit high, the cutoff of any exam always depends on the number of students who have applied for the exam and difficulty level of the question. And now everybody who has passed 12th, they do apply for the NDA, either they want to join or not. This is the only reason why Cutoffs of NDA are going a bit high, either the paper is not tough it is all same as it was earlier.

The Cutoffs of the 2019 NDA-I was 342 out of 900, the candidate who has scored more than 342 were qualified for the SSB interview. The cutoff was not high but some of the students of the Major Kalshi classes said that paper was easy as compared to the earlier NDA exams. and some students from other institutes said that the paper was tough but I think It all depends on your preparation and capability etc.  The Cutoff of any exam always keeps changing as I said above that it all depends on the number of candidates applied for that and difficulty level of the question paper.

So after analyzing the Last five year NDA cut off you will able to see that level of competition is going higher day by.

The cutoff of NDA 2019 I have discussed above and the NDA I result have been cleared, and the result of NDA II is still pending but we will discuss the expected cut off of NDA II 2019 at last. the last year NDA means here NDA 2018, the NDA cutoff 2018 NDA I and NDA 2 was pretty much similar. The paper was easy to moderate as said by the appeared students and the cutoff the NDA I  and NDA II 2018 was between the 330 to 370. Which was not very tough, If you want to prepare well for this, You must have the proper knowledge and proper guidance for this. You can join the Major Kalshi classes for better preparation. In order to clear the cutoff, you must have a proper plan to crack the cutoff. the preparation is not everything. here are a few tips which you should follow for NDA preparation:-

In order to clear the Cutoff, the candidate must have basic knowledge about the syllabus and cutoff technique. As we know that the NDA syllabus of NDA is very broad and hard to cover all the syllabus at a time. According to the defense experts, Always focus on the Few subjects like if you are good at Physics, chemistry, biology, etc. or If you are good at Arts to prepare your history, civics, geography, etc and English is scoring subjects among all. prepare your English a little bit better.

Candidate has to tick the minimum 40 correct answers of mathematics to qualify for the GAT paper, So prepare your maths first and then move to any other subjects. Here are books for NDA which is the best book among all the NDA books, you can click on the given link to download these books.

This is all about NDA Cut off 2019 and NDA last Year Cut offs, NDA expected cutoff every year. If you guys want to serve for the nation and wanted to clear the Defence examination, can join Major Kalshi Classes, Here we have experienced faculty for all the subjects. For more inquiries, you can call us at 9696220022 and 9696330033 or go to our official website www.majorkalshiclasses.com. Thank you. 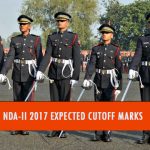 OTA Passing Out Parade in Gaya 2019