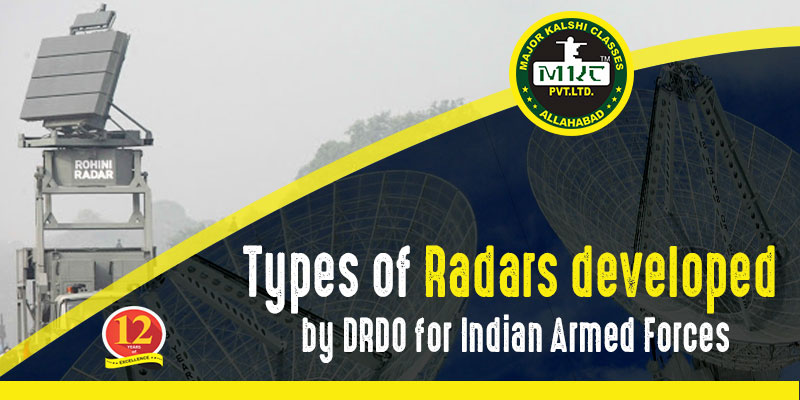 Types of radars developed by DRDO for Indian Armed Forces

Types of Radars For Indian Armed Forces: Electronics and Radar Development Establishment or LRDE is the laboratory in Indian that is responsible for the development of radars. This laboratory comes under Defence Research & Development Organization (DRDO). This organization has met success with several types of radar systems developed by it being inducted in Indian Armed Forces in huge numbers. The main aim of this organization is to make India self-sufficient in several key military technologies in order to eliminate import-dependency on foreign military hardware.

Electronics and Radar Development Establishment partners with Bharat Electronics Limited and various other private companies like Astra micro and Data patterns to produce radars. Here, we bring a list of types of radars available, including

INDRA (Indian Doppler Radar): One of the most common types of radars is INDRA. It is also known as a series of 2D mobile surveillance radar. It comes with several features, including integrated Identification Friend-or-Foe System, Track while scan and full tracking capabilities to maneuver targets. Besides being used by Indian Air Force and Indian Arm, it was exported to Sri Lanka. It also features advanced signal processing using MTD and CFAR techniques.

RAJENDRA Radar: It is a type of radar which is the heart of Aakash Air Defence System. It is a passive electronically scanned array (PESA) radar which is used to guide Aakash missile to its target. This radar can track 63 targets and engage 4 targets at a time. In addition, it’s range extends up to 80 kilometers and at an altitude of 18 km.

Central Acquisition Radar: It is also known as a 3D S-Band Radar developed by DRDO for Indian Air Force and Indian Army as well. Indian Army uses Rohini variant. On the other hand, Indian Air Force uses Revathi variant. It can track targets up to a range more than 180 km. It has the capability to detect low-altitude targets. This type of radar features digital receiver, programmable signal processor that provides high resolution, accuracy, response, and information availability.

Swathi Weapon Locating Radar: Among all types of radars, it is known as a C-Band pulse Doppler radar which can be used for locating hostile artillery, mortars and rocket launchers, tracks friendly fire locate the impact point of artillery fire in order to issue necessary corrections. It has the capability to track 7 targets at a time. It is helpful for Indian Army to locate Pakistan artillery positions across the LOC.

Ashwini Radar: It is a 4D Low-Level Transportation Radar which aims to track hostile targets along with foolproof accuracy. It can detect high-speed and target up to a range of 200 kilometers. It is an active phased array which can be easily transportable.

Arudhra Radar: It is also known as a Medium Power Radar which is capable of automatic detection as well as tracking of aerial targets right from fighter aircraft to slow-moving targets. This type of radar comes with features like 2D Digital Beam-forming, Time synchronization of multiple receivers, Critical real-time software, firmware, and DBD based active array calibration.

PJT-531 Battle Field Surveillance Radar: Among all types of radars, this type is a man-portable 2D short-range battlefield as well as perimeter surveillance radar. It is used by Indian Army and BSF along with foreign customers, including Indonesia and Sudan. This radar can operate in J Band in 21 frequencies and defect crawling men, group of men, Armored Vehicles and Heavy Vehicles at different distances.

We hope that this blog provides you with all the required details about the Types of radars developed by DRDO for Indian Armed Forces. If you are a candidate preparing for Defence Forces, avail the Best Books or Study Material from MKC Publications. For further inquiry, feel free to call us on +91 9696330033/9696220022 or

Types of RadarsTypes of radars developed by DRDO

The Issues behind the Burning of Parali