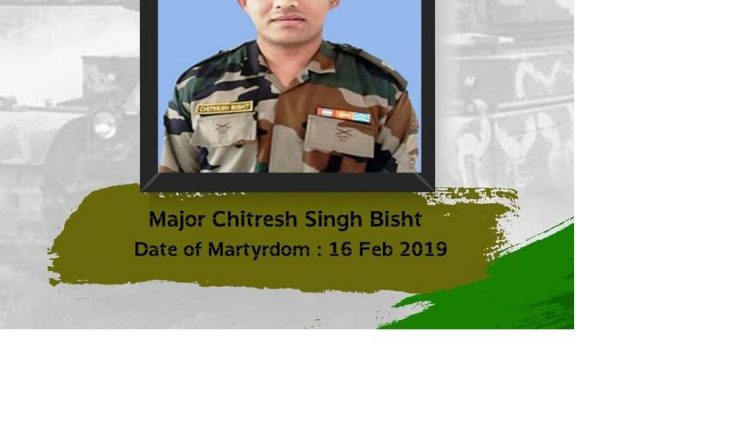 “Brave men rejoice in adversity, just as brave soldiers triumph in war.”— The bravery of Late Major Chitresh Bisht truly manifested the words .Today we shall know about the bravery of Maj Chitresh Bisht. On Feb 16,he got martyred while doing his job sincerely which he opted for .  Born on 1 Dec 1987, Maj Chitresh was child of retired Police Inspector Mr.SS Bisht and Mrs.Rekha Bisht .Maj Bisht had an elder brother Neeraj amd younger  sister Shruti . After completing his matriculation and higher secondary studies, Maj Chitresh joined the Army through Technical Entry Scheme(TES)in 2006 and completed engineering from college of Military Engineering (CME)Pune.

After completing his training Maj Bisht was commissioned on 12June 2010 from IMA Dehradun into 55 Engineering Regiment of the corps of Engineers . One of the oldest arms of the Indian Army, the Corps of Engineers consists of three major constituents namely Combat Engineers, MES and Border Roads. The Corps also provides officers to the Military Survey and Defence Research & Development Organization. In war, Combat Engineers provide mobility to own forces by constructing bridges, tracks, and helipads; on the other hand, the Corps denies the same to the enemy by creating obstacles such as laying mine-fields and demolition of bridges.

Major Chitresh Bisht was a combat Engineer in laying and defusing land mines and had participated in numerous risky operations . He was a specialist in mines and to safely defuse it . In the year 2019, He was in service with the 55 Engineering Regiment and was operating as  Bomb Disposal Squad leader in support of the unit’s operations .

Naushera has been a favourite hotbed for militant insurgency from the very long time. The year 2019 was the same… A major incident took place, a CRPF convoy was attacked by the militants resulting in death of two officers and one civilian . If the militants can’t attack to the soldiers directly , then they use to place mines on the way of the convoy of vehicles.

In 2019,Maj Bisht’s unit was deployed in Naushera sector of Rajouri district in Jammu and Kashmir.The unit was tending along the LOC in Rajouri district .The area was very volatile thus the unit had to maintain a strict sentry at all times and deployed patrols with regular frequency .Landmines were placed in a heavy number thus the Bomb Disposal Squad of the unit played a crucial role in sanitizing the routes .Maj Chitresh Bisht as leader of the squad was involved in numerous mine clearing operation for the unit. Maj Chitresh Bisht as a leader of the team was involved in numerous mine clearing operations for the unit. On 16Feb 2019, Maj Bisht was tasked to lead one such mine clearing operation in Laam Sector of Naushera in Rajouri district . Feb 16, was same day as usual .The convoy was on the route to LOC.At about 3pm,mines were detected on the Naushera track and Maj Bisht leading the Bomb Disposal Squad,got down to the task of sanitizing the track . he successfully defused one of the mines and without thinking a second of his own life,Maj Bisht continued to carry out the clearing of the track mines. While defusing another mine,the device got activated resulting in a blast .  Maj Bisht absorbing the burnt off the blast absorbed most of the splinters,thereby screening his comrades behind him.

Maj Bisht later capitulated to his injuries and was martyred. It was a bad coincidence that Maj Bisht was going to get married on 7Mar 2019, but the destiny was fateful .On 15 Feb ,the birthday of his father he called him in the morning to wish him and informed that he would arrive home by 28Feb. He told his mother on the phone that I will come and get my saree of choice. Maj Bisht was more devoted to the higher cause of serving the motherland and laid down his own life in the service of the nation at the age of 31 years . Showing ultimate bravery and courage in the battlefields , Maj Chitresh Bisht has defused total 25 bombs. Maj Chtresh Bisht was given the gallantry award, “Sena Medal” for his admirable courage ,devotion to duty and supreme sacrifice .