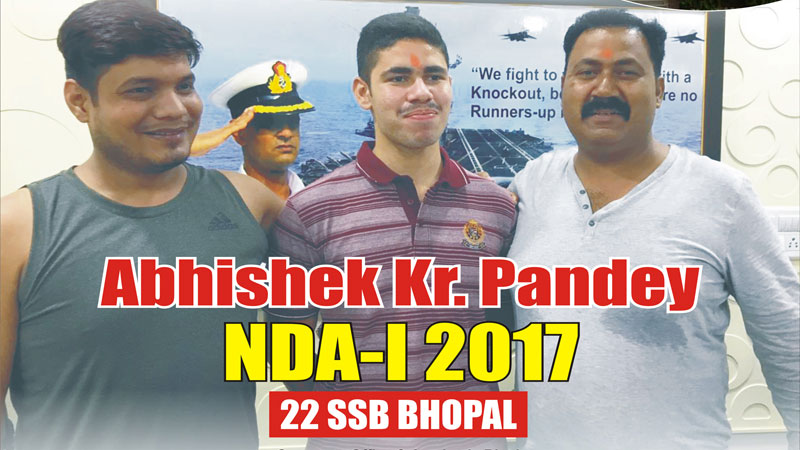 Hello! This is me Abhishek Kumar Pandey I got recommended in my very firstattempt for the NDA-139 course by 22 SSB Bhopal.

I’m writing this blog because when you get recommended it became your duty to encourage other young aspirants and guide more and more young aspirants who are willing to join Armed forces, Although I was from the Rastriya Military School, Ajmerbut still my preparation was incomplete without external source of guidance but here Major kalshiClassees Pvt. Ltd. plays eminent role for my recommendation in SSB.

Basically I’m from village Langaupura, District Siwan, Bihar after my schooling I was prepared for my goal, my vision was clear and I knew that I will be officer one day but still to groom my skills and personality I was looking for some academic institution. Even my father Mr. Ajay Kumar Pandey served the Indian Armynow he is Ex-serviceman. So yes serving the motherland was in my blood, but still I was lacking somewhere I was hunting for the best place for the above purpose then occasionally one day in newspaper advertisement I got to know about Major Kalshi Classes Pvt. Ltd., The premier defence training leading institute of India. After qualifying written exam I had started working with Major Kalshi Classes for my SSB. As the date of my SSB is approaching and I was brushing up my knowledge with fabrication of hidden consummate skills inside me. After reporting in 22 SSB Bhopal and completing other formalities and Documentation. I found myself in seventh sky. The ecstasy inside me I can’t explained. Let me share my five days experiences during SSB.

Screening – After getting chest no. on Day of reporting according to briefing by JCO we reported for Screening at 6:30 in morning we were made to sit in a big hall, An officer briefed us about the OIR there were about 50 questions that have to solve in 25 minutes, I attempted the entire section and every question. After this, we were briefed about PPDT, thereafter a hazy picture was showed to usbased on which we wrote a story. After this we were divided in several group of 15 candidates in each. Where we have to narrate story and then after to have group discussion to find common story among entire group. My narration was good, full of confidence, but then came the GDit was complete chaos, after this discussion result of screening was announced and I was screened in.

Psychology –Next day we reported at early morning and briefed about the first test TAT in which i have to write stories on the basis of given pictures although few pictures were negative but I approached positively and genuinely as my mentors taught me in Major Kalshi Classes I wrote practical and authentic stories. The next test was of WAT I wrote meaningful sentence from list of given words. SRT was although very time taking but I started reacting fastand genuinely what in supposed to do if that kind of absurd situation come across me. I guess approximately I attempted 55 SRTs. In SD Self-Descriptionpart I wrote actual thing about me and I did everything on prescribed time.

GTO –In GTO task due to my preparation over my GK and current affairs I did well in group discussion and lecturette. Guidance at Major Kalshi Classes helped me a lot to do well in GD and other outdoor tasks. My physical fitness and practical approach helped me a lot to perform well. My lecturette task was not well as I spoke for 3 minutes only.GTO was not very tough, I performed Command task in a better way it was like when you command your fellows with conviction in your voice, you should sound and act like a commander. Ask your fellows not to speak unless asked by you.

Interview and Conference –Just after the GTO on 4thday the most dreaded thing at the SSB was interviewed by the board president in which interviewer asked mesome of thebasic and general questions about me and why family background, my educational background, hobbies, sports and other activities for these types of questions I was already prepared so I answered him confidently and over all my interview was good.Thereafter my conference was started. I got my chance in which I was asked about my stay and my experience. Few suggestions were also asked and why I want to join army. I gave my actual response and I think, I fully satisfied the panel.

Finally the moment arrivedfor which I was waiting. We all were called in a hall and then an officer came and announced the result in which 6 candidates got recommended and I was also one of them.

The life changing that I learned from SSB is First and foremost, never lose hope. Finally I want to give my honest-to-goodness thanks to Major Kalshi Classes Pvt. Ltd. for making my life.