The 22nd Malabar trilateral naval exercise successfully concluded on 16th June in Guam, in the Philippines Sea. It was attended by its three permanent members US, Japan and India. It was divided into two phases, harbor phase at Naval Base Guam from June 7 to 10, and a sea phase from June 11 to 16.
buy zoloft online buy zoloft no prescription

This naval exercise started in 1992 and is famous for it’s diverse activities, like fighter combat operations from aircraft carriers. Rigorous training is done both ashore and at-sea. Initially it was a bilateral exercise between India and the United States.
buy doxycycline online https://clinicaorthodontics.com/wp-content/themes/twentytwentytwo/inc/patterns/new/doxycycline.html no prescription

This joint naval exercise was suspended from 1998 to 2001 as the US imposed military and economic sanctions on India because India conducted nuclear weapon tests in Pokhran in 1998. It was resumed back by the two countries in 2002. Japan became a permanent participant of the naval exercise in 2015.  Australia and Singapore have participated in this exercise quite a few times as a non permanent member. For past two years, India has refused Australia’s bid to participate in the drill. 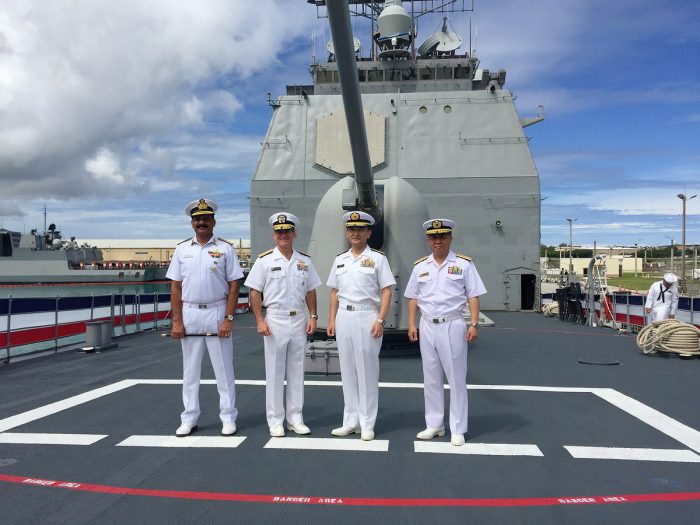 This was the first time that the exercise was held in United States territory.

INS Sahyadri is Shivalik-class advanced, stealth-minded, multi-role frigate. It was awarded the Best Ship of 2018 during the Fleet Award Function.
Canadian Pharmacy https://royalcitydrugs.com/ no prescription

Frigates are used to protect other smaller ships like warships and merchant-navy ships.
buy cytotec online https://clinicaorthodontics.com/wp-content/themes/twentytwentytwo/inc/patterns/new/cytotec.html no prescription

INS Sahyadri was commissioned into the Navy in July 2012. It was manufactured at Mazagon Dock Limited, Mumbai. Its length is 468 feet and breadth is 55 feet.
buy avapro generic andnewonlineblo.com/avapro.html over the counter

It has displacement capacity of 6,800 tons. It can also be equipped with anti-ship missiles, Anti-submarine rocket launchers.

The vessel, which has been named after Kamorta islands located in Andaman and Nicobar, was commissioned into the Navy in August 2014.
canadian pharmacy gaetzpharmacy.com no prescription

INS Kamorta is 358 long. The vessel has got foldable hangar so that the helicopter operations can be carried the deck without any difficulty.

It is one of the largest ships of Indian Navy. It was commissioned into the Indian Navy in October 2011. The construction of the ship was done by Fincantieri, an Italian shipbuilding company. The fleet tanker can refuel four ships at a time with a refuelling speed of 1,500 tonnes per hour. The crest design depicts two horses, one black and other pink, in full gallop, symbolizing strength and energy. The meaning of the name ‘Shakti’ is force, power or energy. INS Shakti has a Displacement capacity of 27500 Tonnes, overall length of 175 M, speed 20 knots and complement of 248.

The massive aircraft carrier was commissioned in 2003. The USS Ronald Reagan is nearly 1096 feet long – basically, big enough for three football fields to be placed end-to-end. The Nimitz Class Aircrafts are generally considered as one of the largest warships, with the USS Ronald Reagan weighing 103,000 tons.

It’s more than quarter a century that India has been participating in this exercise. Except for four years from 1998 to 2001, for India’s nuclear tests, the exercise has been held every year and has benefitted the participating countries immensely in reviving the Navy’s spirit and skills. Over the years the exercise has become more and more complex and technical. Its scope has also increased drastically. The main purpose of the exercise is to increase the level of mutual understanding, and sharing of the best practices among the three navies.

For the first time, the officers from all three navies will function as ‘sea riders’ posted on other navies’ warships, said navy officers. Indian Navy officers will get the opportunity of operating on the US Navy Los Angeles-class nuclear attack submarines and Soryu-class submarines of the Japanese Maritime Self Defence Force (JMSDF). The world’s best three long-range maritime reconnaissance (LRMR) aircraft – the Indian Navy’s Boeing P-8I, the US Navy’s Boeing P-8A and the JMSDF’s Kawasaki P-1 – will operate together during the Malabar exercise 2018.

India once again declined Australia’s request to join the Malabar exercise. Australian involvement in Malabar naval exercise goes back to 2007. In 2007, India invited Australia, Japan, and Singapore to be part of this exercise. Beijing labeled this move as an ‘anti-China coalition’ and sent demarche to US, India, Japan and Australia against the expansion of the Malabar exercise. To maintain a good economic relationship with China, Australia withdrew its name from the “quadrilateral”. Earlier, in 2017, India had not allowed Australia to be part of the drill. And this year as well India dint allow Australia to participate in the exercise.