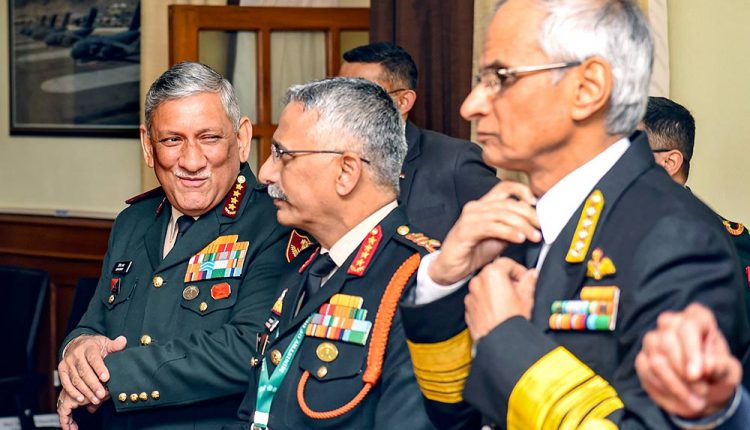 The Indian Army is a voluntary service, the military draft having never been imposed in India. It is one of the largest standing armies (and the largest standing volunteer army) in the world, with 1,237,000 active troops and 800,000 reserve troops. The army has rich combat experience in diverse terrains, due to India’s varied geography, and also has a distinguished history of serving in United Nations peacekeeping operations. Initially, the army’s main objective was to defend the nation’s frontiers. However, over the years, the army has also taken up the responsibility of providing internal security & other insurgency matters.  Through its large, sustained troop commitments India has been praised for taking part in difficult operations for prolonged periods. The Indian Army is large enough to devote several corps to the strike role. The army is also looking at enhancing its special forces capabilities

Being a force with a huge no. of serving personnels ,Indian army is well organized & its command centres plays a vital role in this.

The Army operates in Six operational commands & one training command. Each command is headed by General Officer Commanding-in-Chief with the rank of Lieutenant-General. Each command directly reports to Army headquarters in New Delhi.

There is also the Army Training Command abbreviated ARTRAC. Besides these, army officers may head tri-service commands such as the Strategic Forces Command and Andaman and Nicobar Command, as well as institutions such as the Integrated Defence Staff.

Given Below are the Command centres with location & commanders:

( The XVII corps of Eastern Command is newly raised .)

The commanders of these command centres have a fixed serving period to serve on the respective post.

In 2021, Five top commanders of Indian army are going to be annuated. These commanders have a majestic service period while joining .

Commanders who are superannuating in 2021 are :-

Service Period – (Jul 1981 – present ). He was also the commander of Southern Command.

In the very first month of the January 2021 , the Vice Chief of Army Staff will retire . His Service Period will get on Jan 31. LT GEN Saini has served on international deputations as well including Deputy Chief Military Personnel Officer in the Iraq- Kuwait UN Mission; Global Peace Operations Initiative’s peacekeeping exercise in Mongolia; a counter-terrorism exercise in Australia.

LT GEN ISGHUMAN Will retire on March 31.  LT GEN Ghuman was commissioned into Brigade of the Guards in June 1981. He has commanded an anti-tank guided missile battalion during Operation Parakram, an infantry brigade, and an Infantry Division. He has also served as an observer in the United Nations Mission in Angola. In July 2019, he was appointed to succeed Abhay Krishna as GOC-in-C, Central Command, effective 1 October.

During his career, he has been awarded the Ati Vishisht Seva Medal in 2017 for his service as Chief of Staff of Western Command and the Param Vishisht SevaMedal in January 2019.

LT GEN AS KLER will retire on March 31. Kler was commissioned into 68 Armoured Regiment in June 1982.  His family has over 300 years of service in the Indian Armed Forces. He has also held important staff positions like the Chief of Staff of Army Training Command (ARTRAC). He later served as the Director General Military Training (DGMT) . LT GEN AS KLER is very passionate about cycling,fitness & sports.  He made news when he cycled 270 km from Delhi to Jaipur to take command of the South Western Command. As an Army Commander, he was entitled to fly down to his headquarters or drive down in a cavalcade of military vehicles

He has been awarded the Vishisht Seva Medal in 2015 and a COAS Commendation card in 2009.

LT GEN ANIL CHAUHAN will retire on May 31. Chauhan was commissioned into the 11 Gorkha Rifles in 1981. He has held several command, staff and instructional appointments during his career and has experience in counter-insurgency operations in Jammu & Kashmir and Northeast India.

Gen RP Singh was commissioned into the Mechanised Infantry Regiment on 12 Jun 1982. He is an alumnus of NDA,Khadakwasla & IMA, Dehradun .

General RP Singh has held various regimental, staff and instructional appointments. These include Brigade Major of an Infantry Brigade in intense Counter Insurgency areas in J&K, GSO-2, Military Intelligence Directorate at IHQ of MoD (Army).He was Instructor at School of Armoured Warfare Ahmednagar and was also posted as United Nations Military Observer in United Nations in Africa. General RP singh commanded a Mechanised Infantry Battalion, an Armoured Brigade and an Infantry Division in the Western Theatre.

The army’s main objective is  to defend the nation’s frontiers. Although ,Indian Army will face several shuffles in this year but it is sure that the organization will get a true leader who will always lead them to the path of victory.