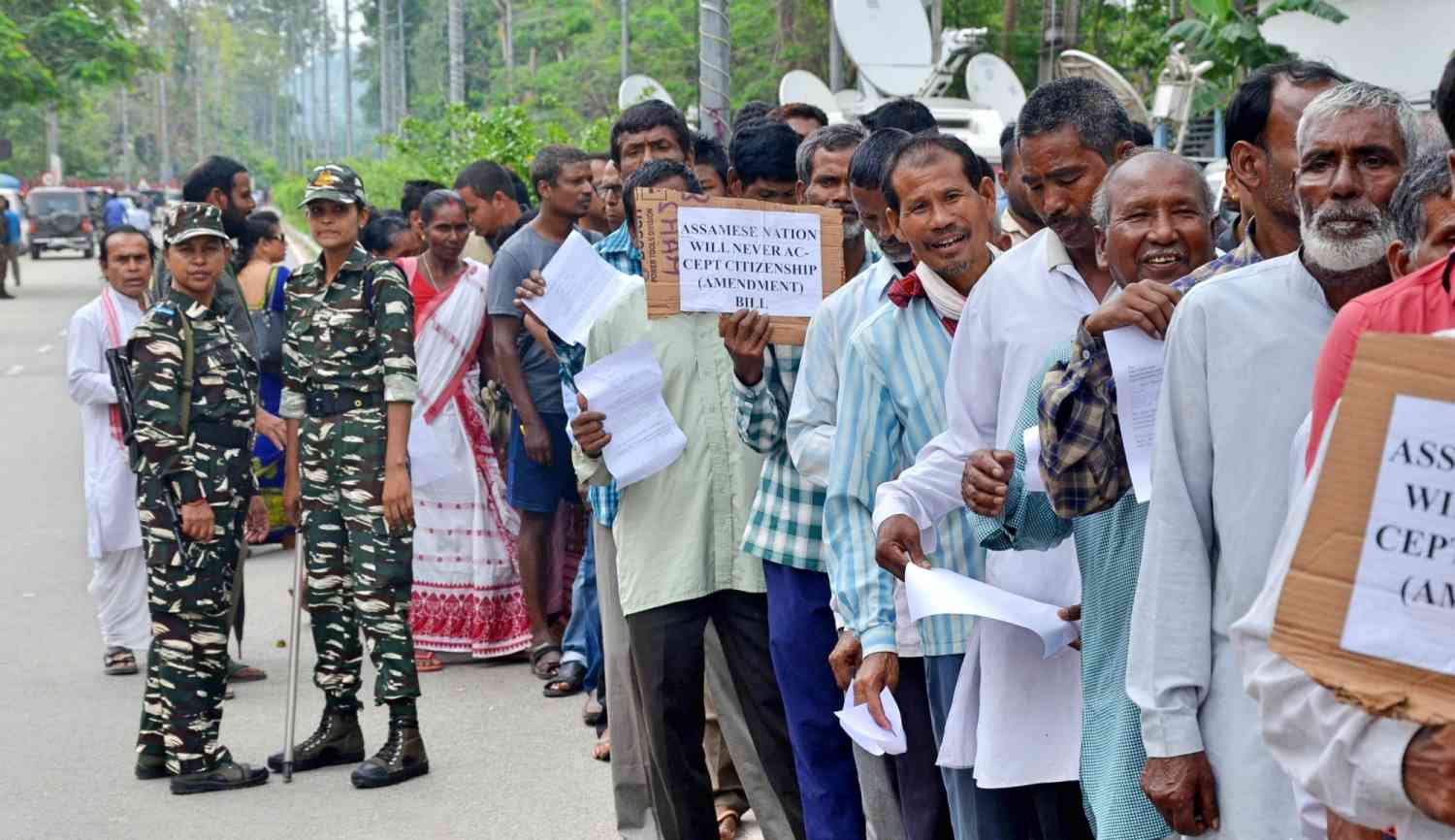 Illegal Immigration in Assam –  Although “illegal migration” or/and “illegal immigrants” (particularly from Bangladesh) are very much a part of the public discourse on society, polity, and economy of Assam, the definitions of these two terms are far from being concrete. The shared history of the British colonial rule, the partition at the time of independence, the role played by India in the creation of Bangladesh, and the provisions under the Citizenship Act – all contribute to this lack of concreteness. Section 2(1)(b) of the Citizenship Act of 1955 defines an “illegal migrant” as a foreigner who entered India

(I) Without a valid passport or other prescribed travel documents: or

(II) With a valid passport or other prescribed travel documents but remains in India beyond the permitted period of time.

However, there are a few caveats that need to be considered before this definition can be applied to identify illegal immigrants.

The All Assam Students Union (AASU) is yet again at the forefront of an anti-foreigner agitation in the state. Though it doesn’t have the intensity of the Assam Movement recorded between 1979 and 1985, the ongoing agitation against the Narendra Modi government’s decision to amend the Citizenship Act, 1955, certainly has the propensity to turn into a mass movement against yet another central government.

The amendment is being sought by the BJP government to grant Indian citizenship to Hindu Bangladeshis among others coming from two other countries – Pakistan and Afghanistan. If amended, the Act would come in direct conflict with the Assam Accord of 1985, signed by AASU with the Central government to find a solution to the anti-foreigner movement.

The stated aim of the exercise is to detect all non-citizens, defined by the provisions of the Assam Accord of 1985. According to the accord, anyone who cannot prove that they or their ancestors had entered the state before the midnight of March 24, 1971, will be counted as an illegal migrant. The cut off date coincides with the start of the Bangladesh war, which triggered a wave of migration into Assam.

What, then, will happen to a large number of people suddenly designated foreigners? India does not have any formal repatriation treaty with Bangladesh. In fact, Bangladesh affirms that there has been no large-scale migration to Assam in the last 30 years. In bilateral engagements between the two countries, India has not officially broached the subject. Analysts claim India’s reluctance is strategic; it does not want to upset ties with the current dispensation in Bangladesh.

With deportation being off the table, at least for the time being, an old proposal of granting work permits to non-citizens is gaining currency yet again in Assam and neighboring states of the North East.

At the time, there was considerable opposition to the idea in Assam. Among its most vocal detractors was former Assam police officer Hiranya Kumar Bhattacharya, who has written several books on the subject of illegal migration from Bangladesh to India. But now even Bhattacharya has a somewhat similar proposal, though with some key differences.

In addition to people left out of the National Register of Citizens, future migration to India from Bangladesh, he claimed, was also inevitable for a variety of reasons The All Assam Minority Students’ Union’s Ainuddin Ahmed said while it ideally wanted illegal migrants to be deported, it did not object to a work permit-based resolution to the problem as long as it was within the ambit of the Indian constitution. It was, he said, a better approach than putting people in detention camps.

No substitute for citizenship | Illegal Immigration in Assam

Academic Sanjib Baruah, however, was less enthusiastic about granting work permits to people left out of the updated citizenry list and whom Bangladesh does not accept as citizens. Work-permit regimes functioned on the premise that the person has rights of full citizenship in another country. The political scientist said that while India could sign an agreement with Bangladesh to allow a certain number of people to come to India to work and give them work permits valid for a certain period of time, that could not be used as a tool to deal with people found to be non-citizens in the updating exercise, as suggested by Bhattacharya.

The illegal migrants do not pay tax and thus they do not contribute to government revenue. Agricultural income – except for income from cash crop like tea – is not taxed.

Furthermore, the immigrants also do not pay tax on their income from petty trades.

However, the government spends on providing basic infrastructure: roads, power supply, water supply, health, education to these immigrants. Also, the state government has established special departments: the Char Area Development Department and the Minority Development Corporation, primarily for the development of the immigrants from Bangladesh. Government funds are allocated to these departments. If we further add the large sum of money the government spends every year in providing reliefs to the flood victims among whom the immigrants living in the riverside deltas constitute a large fraction, and subsidies on food items through fair price shops, the total costs to the government of maintaining this immigrant population would run into several crores of rupees.

To begin with, Islam has had a history of more than seven centuries in Assam, and today’s population is made up of a large number of local converts as well as descendants of Mughal and Pathan migrants of long ago. Demographers believe that poverty, illiteracy, and social backwardness are directly linked to significant population increase, and hence it is natural for the population of the East Bengal settlers to have increased at a rate faster than some adjacent communities.

Since people move across the border from Bangladesh primarily for economic reasons, the solution to this problem must address these economic issues. As India’s economy grows at a fast pace, the pace of migration is also likely to accelerate. It is important to recognize that despite the impressive growth that India has been able to achieve in recent years, one-fourth of India’s population still lives under the poverty line.

Accelerated immigration from across the border will be a formidable obstacle to India’s effort to reduce poverty. Also, it is in India’s best interest that Bangladesh does not fall far behind in the process of economic growth. Greater economic cooperation between the two countries is of strategic importance. Particularly, in the border areas India, in cooperation with Bangladesh, should launch economic development programs that improve the quality of life on both sides of the border. These programs could be introduced as private-public partnership initiatives with the involvement of non-governmental organizations (NGOs) and could aim at providing basic education and health care, and generating employment.

We hope that this blog should’ve provided you with all the required details about Illegal Immigration in Assam. If you are a candidate preparing for Defence Forces then avail the Best Books or Study Material on MKC Publications. For some further inquiry feel free to call us on: 9696330033/9696220022 or Visit us on:

The Issues behind the Burning of Parali