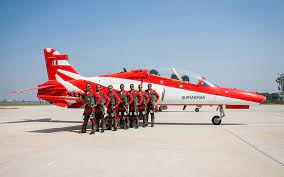 Surya Kiran is an aerobatic team of the Indian Air Force for performance on various occasions. Here we are going to discuss Some Interesting facts about IAF Surya Kiran. In early 1996, serious planning began for AVIA-96, the first major air show and aviation trade event ever hosted in India. The organisers’ initial intention was to invite an aerobatic team from overseas, but some senior IAF officers were confident that the world’s fourth-largest air force would be able to field its own team. This formed the genesis of the present team, the Surya Kiran, meaning rays of the sun.

I hope this will motivate you to join Indian Airforce and be a part of the glory of the sky. Here we announced that we have opened our off-campus for the preparation of all defence examinations. So if you are interested and wanted to join the armed forces then join Major Kalshi Classes.

This is all about the IAF’s Surya Kiran Aerobatic team. Know Interesting facts about it. If you guys want to serve the nation and wanted to clear the Defence examination, can join Major Kalshi Classes, Here we have experienced faculty for all the subjects. For more inquiries, you can call us at 9696220022 and 9696330033 or go to our official website www.majorkalshiclasses.com. Thank you.

What is DSSC? Defence Service Staff College. Know everything about DSSC.

10 Interesting facts about the Indian Army You must know

How to Join Indian Air force as an Officer?

How to Become an Airman in the Indian Air Force?