Deadliest tanks, missiles and weapons of the Indian Army

Indian Army is the 2nd largest in the world 3rd largest. The primary mission of the Indian Army is to ensure national security. It has also been an active participant in numerous United Nations peacekeeping missions.  It has a glorious past. It is one of the most successful and discplined Army and is equipped with world class arms and ammunition. With the help of its research and development body DRDO and many other friendly nations like Russia, Britain, Israel and USA, It has procured some of the world class, tanks, missiles and other artilleries. Following are some of the best and widely used indian armies battle tanks, ballistic and cruise missiles, assualt rifles rocket launchers.

Pinaka is a multiple launch rocket system produced in India and developed by the Defence Research and Development Organisation (DRDO) for the Indian Army. The system has a maximum range of 40 km for Mark-I and 75 km for Mark-II, and can fire a salvo of 12 HE rockets in 44 seconds. The system is mounted on a Tatra truck for mobility. Pinaka saw service during the Kargil War, where it was successful in neutralising enemy positions on the mountain tops. It has since been inducted into the Indian Army in large numbers.

As of 2014, about 5,000 missiles are being produced every year while an advanced variant is under development with enhanced range and accuracy.

The Indian Army operates the Russian BM-21 ‘Grad’ Launchers. In 1981, in response to the Indian Army’s need for a long range artillery system, the Indian Ministry of Defence sanctioned a project to develop the same. Development began in December 1986, with a sanctioned budget of 26.47 crore. The BrahMos is a medium-range ramjet supersonic cruise missile that can be launched from submarine, ships, aircraft, or land. It is the fastest supersonic cruise missile in the world. It is a joint venture between the Russia and India who together have formed BrahMos Aerospace. The name BrahMos is a portmanteau formed from the names of two rivers, the Brahmaputra of India and the Moskva of Russia. 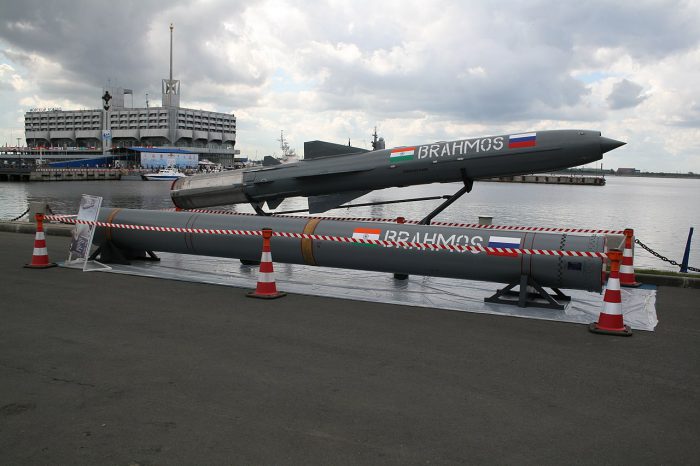 Agni has been one of the most successful missiles of India. its 5th version is in service and 6th version in production. Agni -V is a solid fueled intercontinental ballistic missile (ICBM) developed by Defence Research and Development Organisation (DRDO) of India. It will greatly expand India’s reach to strike targets more than 5,500 km away. Agni-V was first test fired on 19 April 2012. Agni-V ICBM has been designed with the addition of a third composite stage to the two-stage Agni-III missile. To reduce the weight it is built with high composite content. The 17.5-metre-long Agni-V would be a canister launch missile system so as to ensure that it has the requisite operational flexibility and can be swiftly transported and fired from anywhere. Agni-V weighs around 49 tonnes; one tonne more than Agni III and a much longer range. 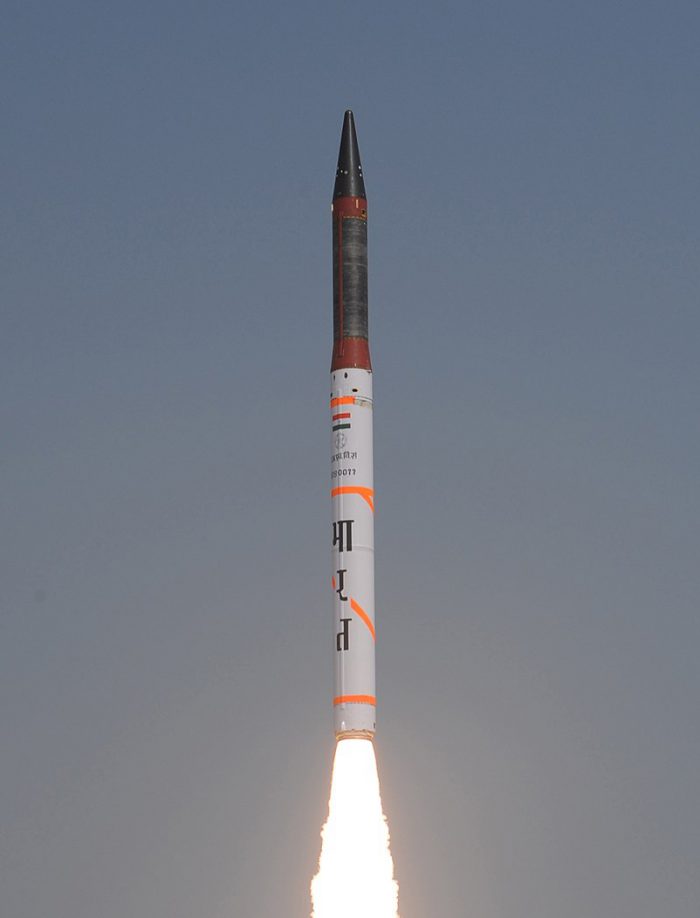 Akash is a medium-range mobile surface-to-air missile defense system developed by the DRDO and produced by Bharat Dynamics Limited for Missile Systems and Bharat Electronics for other radars, control centers in India. The missile system can target aircraft up to 30 km away, at altitudes up to 18,000 m. It has the capability to “neutralise aerial targets like fighter jets, cruise missiles and air-to-surface missiles” as well as ballistic missiles. It is in operational service with the Indian Army and the Indian Air Force.

An Akash battery comprises a single Rajendra 3D passive electronically scanned array radar and four launchers with three missiles each, all of which are interlinked. Each battery can track up to 64 targets and attack up to 12 of them. The missile has a 60 kg high-explosive, pre-fragmented warhead with a proximity fuse. The Akash system is fully mobile and capable of protecting a moving convoy of vehicles. The launch platform has been integrated with both wheeled and tracked vehicles. While the Akash system has primarily been designed as an air defence SAM, it also has been tested in a missile defense role.

The Shaurya missile is a canister launched hypersonic surface-to-surface tactical missile developed by the DRDO for use by the Indian Armed Forces. It has a range of 700 km and is capable of carrying a payload of one ton conventional or nuclear warhead. It gives the potential to strike in the short-intermediate range against any adversary.

Prahaar is a solid-fuel rocket surface-to-surface guided short-range tactical ballistic missile for battlefield use developed by DRDO of India. It will be equipped with omnidirectional warheads and could be used for striking both tactical and strategic targets. Prahaar is expected to replace Prithvi-I.

This solid-fuelled missile can be launched within 2–3 minutes without any preparation, providing significantly better reaction time than liquid-fuelled Prithvi ballistic missiles and act as a gap filler in the 150 km range, between the Pinaka Multi Barrel Rocket Launcher and Smerch MBRL in one end and the Prithvi ballistic missiles on the other. Prahar was test-fired successfully on 21 July 2011

The Arjun is a third generation main battle tank developed by DRDO, for the Indian Army. It can achieve a maximum speed of 67 km/h. It has a four-man crew: commander, gunner, loader and driver. Automatic fire detection and suppression and NBC protection systems are included. All-round anti-tank warhead protection by the newly developed Kanchan armour is claimed to be much higher than available in comparable third generation tanks. 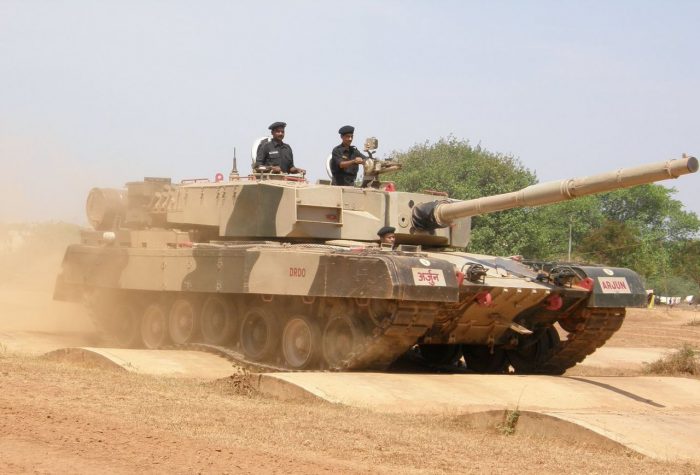 The Arjun entered service with the Indian Army in 2004. They have perfomed better the the T-90 tanks, but, the delays and other problems in its development from the 1990s to the 2000s prompted the Indian Army to order T-90S tanks from Russia to meet requirements that the Arjun had been expected to fulfill

The T-90 is a third-generation Russian battle tank that entered service in 1993. The tank is a modern variation of the T-72B and incorporates many features found on the T-80U. Originally called the T-72BU, but later renamed to T-90, it is an advanced tank in service with Russian Ground Forces and the Naval Infantry. The T-90 uses a 125 mm 2A46 smoothbore main gun, the 1A45T fire-control system, an upgraded engine, gunner’s thermal sight. Standard protective measures include a blend of steel and composite armour, smoke grenade dischargers, Kontakt-5 explosive-reactive armour and the Shtora infrared ATGM jamming system. 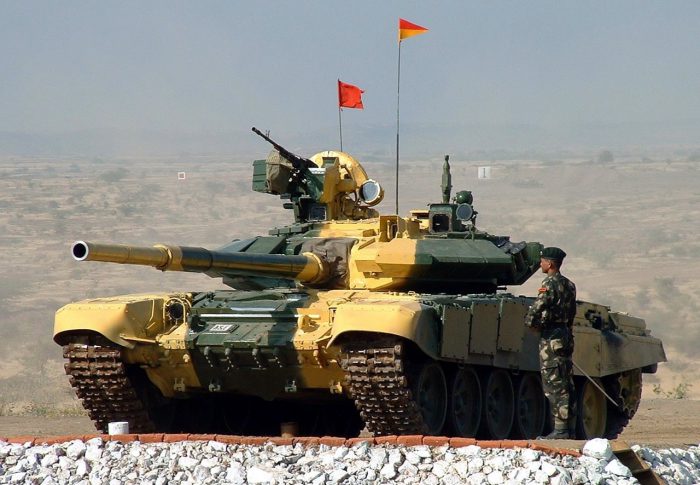 The T-72 is a Soviet second-generation main battle tank that entered production in 1971. About 20,000 T-72 tanks were built, making it one of the most widely produced post–World War II tanks, second only to the T-54/55 family. The T-72 was widely exported and saw service in 40 countries and in numerous conflicts.

The SA80 is a British family of 5.56×45mm NATO small arms, all of which are selective fire, gas-operated assault rifles. The A1 variant was significantly upgraded in the early 2000s by Heckler & Koch as the SA80A2 and remains in service as of 2018. The A3 variant was first issued in 2018 with several new improvements. 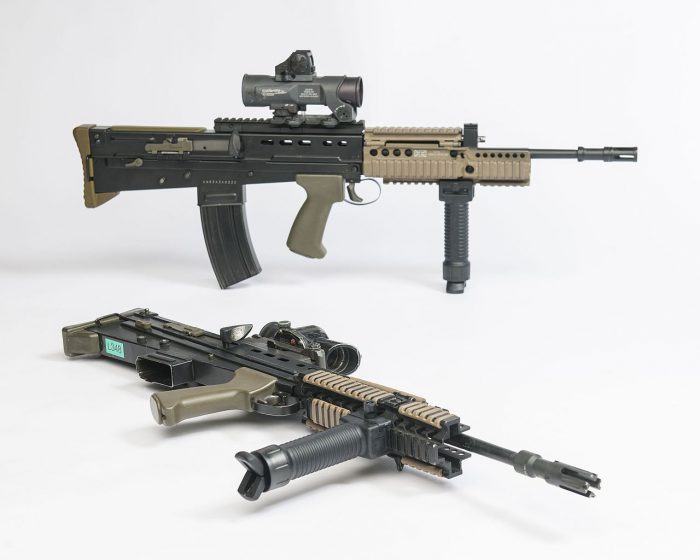 The AKM Automatic Rifle is a 7.62mm assault rifle designed by Mikhail Kalashnikov. It is a common modernized variant of the AK-47 rifle developed in the 1940s.

Introduced into service with the Soviet Army in 1959, the AKM is the most ubiquitous variant of the entire AK series of firearms. Compared with the AK-47, the AKM features detail improvements and enhancements that optimized the rifle for mass production; some parts and assemblies were conceived using simplified manufacturing methods. Notably, the AK-47’s milled steel receiver was replaced by a U-shaped steel stamping reducing its weight by 1 kg, the accuracy during automatic fire was increased and several reliability issues were addressed.

INSAS (an abbreviation of INdian Small Arms System) is a family of infantry arms consisting of an assault rifle and a light machine gun (LMG). It is manufactured by the Ordnance Factories Board at Ordnance Factory Tiruchirappalli, Small Arms Factory Kanpur and Ishapore Arsenal. The INSAS assault rifle is the standard infantry weapon of the Indian Armed Forces. In April 2015, the Indian government replaced some INSAS rifles of the CRPF with AK-47s. In early 2017, it was announced that INSAS rifles were to be retired and replaced by rifles capable of firing 7.62×51mm NATO cartridges.

It is a gas operated assault rifle. It can be fired in single round or three-round burst mode. A telescopic sight or a passive night sight can be mounted on it. It can take NATO-standard 5.56×45mm SS109 and M193 ammunition. It comes with a bayonet. It has a mount point for the ARDE 40 mm under barrel grenade launcher, along with a gas-block for launching grenades and grenade iron-sights. The flash suppressor has a blank-firing adaptor.

The LMG (Light Machine Gun) differs from the standard rifle in possessing a longer range of 700 m, as compared to 400 m range of INSAS standard and assault rifles. It has a longer and heavier barrel with revised rifling, and a bipod. The LMG version uses 30-round magazines and can also accept the 20-round INSAS AR magazine. This model fires in semi and full-auto. It also has a foldable-butt version. 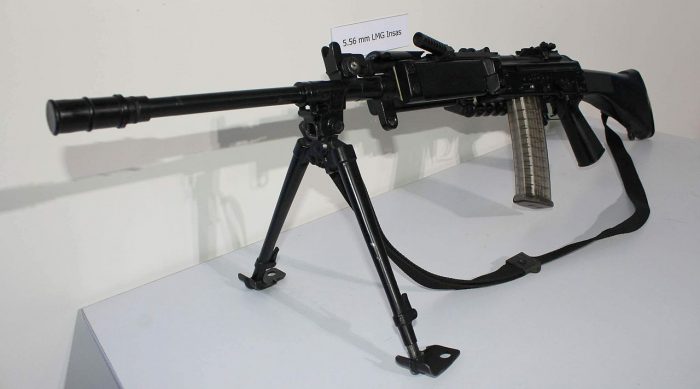 The AGS-17 is a heavy infantry support weapon designed to operate from a tripod or mounted on an installation or vehicle. The AGS-17 fires 30 mm grenades in either direct or indirect fire to provide suppressive and lethal fire support against soft skinned or fortified targets. The weapon uses a blowback mechanism to sustain operation. Rounds are fired through a removable (to reduce barrel stress) rifled barrel.The standard metal ammunition box contains 30 linked rounds. The tripod is equipped with fine levelling gear for indirect fire trajectories. 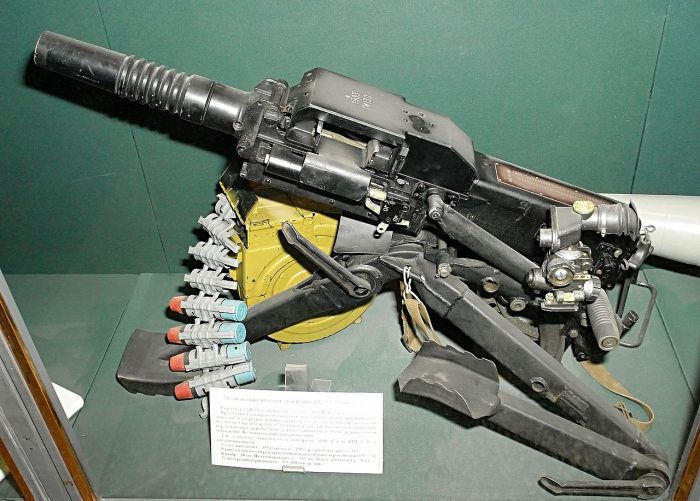 The United Kingdom’s L16 81mm mortar is the standard mortar used by the British armed forces. It originated as a joint design by the UK and Canada.

It was introduced in 1965–66. The weapon can be man-packed by the mortar detachment, in which case the ammunition would be carried by other soldiers of the battalion. In addition to their normal equipment, each soldier would carry four bombs in a pair of two-bomb, plastic containers. The mortar has been used by many countries’ armed forces. 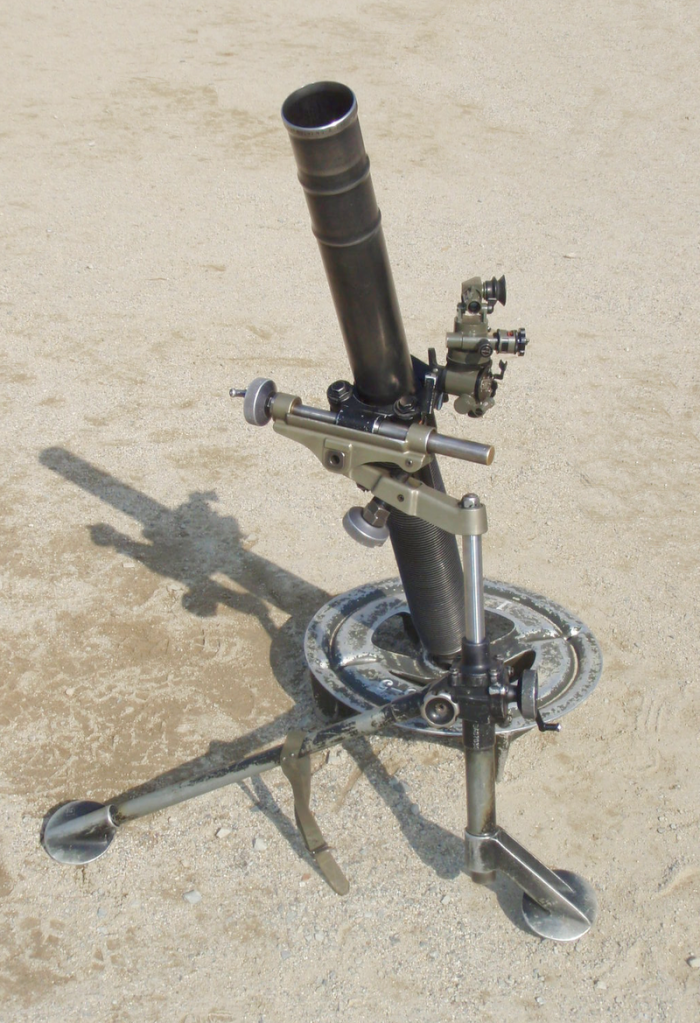 Deadliest Aircrafts and weopons of the Indian Air Force