Deadliest Submarines, Ships and Aircrafts of the Indian Navy

The Indian Navy traces its origins back to the East India Company’s Marine which was founded in 1612. The primary objective of the navy is to safeguard the nation’s maritime borders, and in conjunction with other Armed Forces of the union, act to deter or defeat any threats or aggression against the territory, people or maritime interests of India, both in war and peace. And it has been been doing that sicerely and gracefully. Indian navy has a glorious past. Indian navy promotes bilateral relations between nations through joint exercises, goodwill visits and humanitarian missions, including disaster relief.

As of 1 July 2017, 67,228 personnel are in service with the Indian Navy. As of March 2018, the operational fleet consists of one aircraft carrier, one amphibious transport dock, eight landing ship tanks, 11 destroyers, 13 frigates, one nuclear-powered attack submarine, one ballistic missile submarine, 14 conventionally-powered attack submarines, 22 corvettes, one mine countermeasure vessel, four fleet tankers and various other auxiliary vessels.

It is a modified Kiev-class aircraft carrier which entered into service with the Indian Navy in 2013.

The carrier was purchased by India on 20 January 2004 after years of negotiations at a final price of $2.35 billion. The ship successfully completed her sea trials in July 2013 and aviation trials in September 2013.

Vikramaditya, the floating airfield has an overall length of about 284 meters and a maximum beam of about 60 meters, stretching as much as three football fields put together. Standing about 20 storeys tall from keel to the highest point, the sheer sight of this 44,500 tonnes mega structure of steel is awe inspiring. The ship has a total of 22 decks.

With over 1,600 personnel on board, Vikramaditya is literally a ‘Floating City’. Associated with this large population is a mammoth logistics requirement – nearly a lakh of eggs, 20,000 litres of milk and 16 tonnes of rice per month. With her complete stock of provisions, she is capable of sustaining herself at sea for a period of about 45 days. With a capacity of over 8,000 tonnes of LSHSD, she is capable of operations up to a range of over 7,000 nautical miles or 13000 kms. 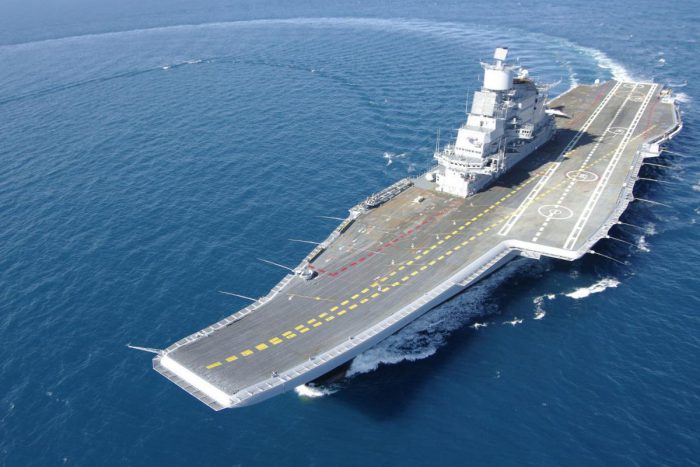 In naval terminology, a destroyer is a fast, manoueverable, long-distance warship intended to escort larger vessels in a fleet, convoy or battle group and defend them against smaller, short-range attackers. The navy operates 11 guided-missile destroyers from three classes: Kolkata class, Delhi class, and Rajput class.

During the 1980s, India signed an agreement with the Soviet Union for five guided-missile destroyers, built under Rajput class. The first ship (INS Rajput) of the class was commissioned on 30 September 1980. All five Rajput-class ships are still in active service. The Rajput class was succeeded by the Delhi class, with INS Delhi, Mysore and Mumbai commissioned in 1997, 1999 and 2001 respectively. The Delhi-class destroyers, built in India, were succeeded by the Kolkata class in 2014. The three Kolkata-class ships have been commissioned in 2014–2016.

The Rajput-class guided-missile destroyers built for the Indian Navy are modified versions of Soviet Kashin-class destroyers. They are also known as Kashin-II class. The ships were built in the former Soviet Union after considerable Indian design modifications to the Kashin design. These included the replacement of the helicopter pad in the original design with a flight elevator, as well as major changes to the electronics and combat systems. Five units were built for export to India in the 1980s. All units are currently attached to the Eastern Naval Command. 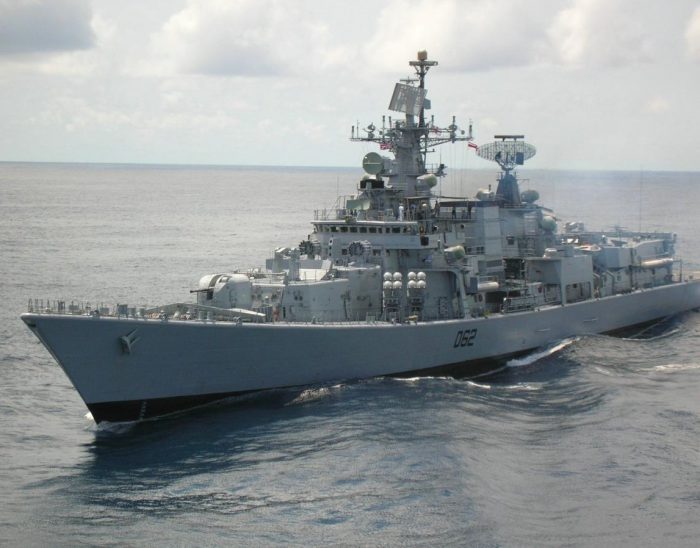 The Kolkata class (Project 15A) are a class of stealth guided missile destroyers constructed for the Indian Navy. The class comprises three ships – Kolkata, Kochi and Chennai, all of which were built by Mazagon Dock Limited (MDL) in India, and are the largest destroyers to be operated by the Indian Navy. Due to delays in their construction, and a problem found during the se  a trials, the initial commissioning date of the first ship of the class had been pushed back from 2010 to 2014. The final ship commissioned was Chennai, in November 2016. 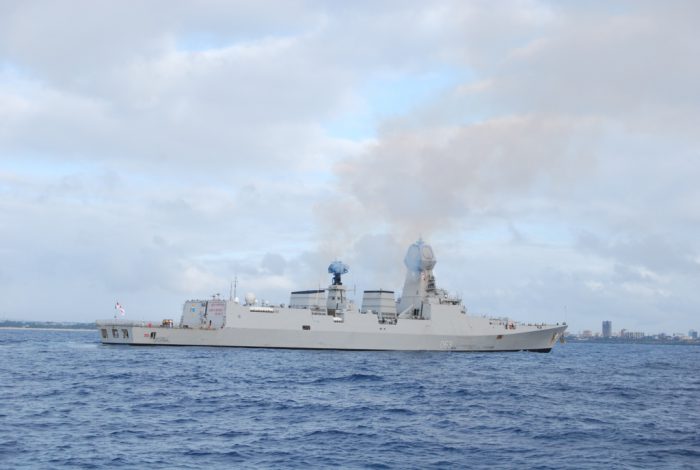 The Delhi-class destroyers are guided-missile destroyers of the Indian Navy. Three ships of this class are in active service. The Delhi-class vessels were the largest vessels to be built in India at the time of their commissioning. The ships were built by Mazagon Dock Limited (MDL) at a cost of Rupees 7.5 billion (equivalent to Rupees 23 billion or US$340 million in 2017) each.

INS Arihant is the lead ship of India’s Arihant class of nuclear-powered ballistic missile submarines. The 6,000 tonne vessel was built under the Advanced Technology Vessel project at the Ship Building Centre in the port city of Visakhapatnam.

Arihant was launched on 26 July 2009, the anniversary of Vijay Diwas (Kargil War Victory Day) by then Prime Minister of India, Dr Manmohan Singh. After fitting out and extensive sea trials, on 23 February 2016, she was confirmed as ready for operations,  and was commissioned in August 2016.

Arihant will be capable of carrying all types of missiles and will have underwater ballistic missile launch capability. It will carry 12 K-15 SLBMs that can be launched even under ice caps. Apart from the K-15s, the submarine will carry a range of anti-ship and land-attack cruise missiles and torpedoes.

Sindhughosh-class submarines are Kilo-class diesel-electric submarines in active service with the Indian Navy. Their names are in Sanskrit, but in their Roman-alphabet forms sometimes a final short -a is dropped.

The Sindhughosh submarines, designated 877EKM, were designed as part of Project 877, and built under a contract between Rosvooruzhenie and the Ministry of Defence (India).

The submarines have a displacement of 3,000 tonnes, a maximum diving depth of 300 meters, top speed of 18 knots, and are able to operate solo for 45 days with a crew of 53. The final unit was the first to be equipped with the 3M-54 Klub (SS-N-27) antiship cruise missiles with a range of 220 km.

Following is the list of all Sindhu ghosh ships

A frigate is a warship generally lighter than a destroyer. It has a mixed armament. They are used to protect other warships and merchant-marine ships, especially as anti-submarine warfare combatants for amphibious expeditionary forces, underway replenishment groups, and merchant convoys. Ship classes dubbed “frigates” have also more closely resembled corvettes, destroyers, cruisers, and even battleships.

There are 13 frigates currently in service under the following classes. 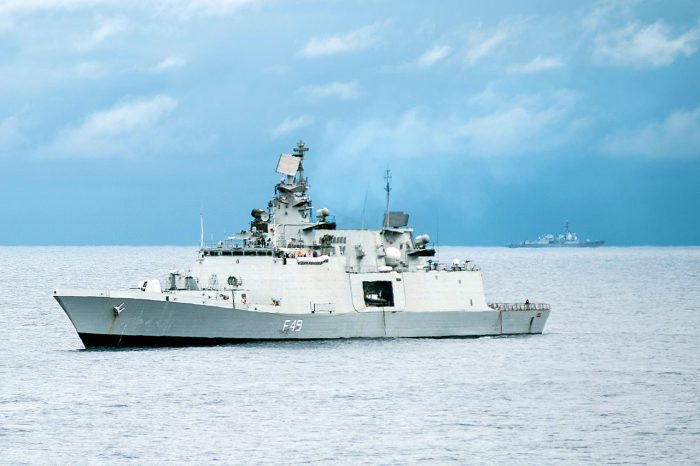 A corvette is a small warship designed for convoy escort duty. There are 22 Corvettes in service under

A corvette is traditionally the smallest class of vessel considered to be a proper warship. The warship class above the corvette is that of the frigat. The modern types of ship below a corvette are coastal patrol craft and fast attack craft. In modern terms, a corvette is typically between 500 tons and 2,000 tons although recent designs may approach 3,000 tons, which might instead be considered a small frigate. 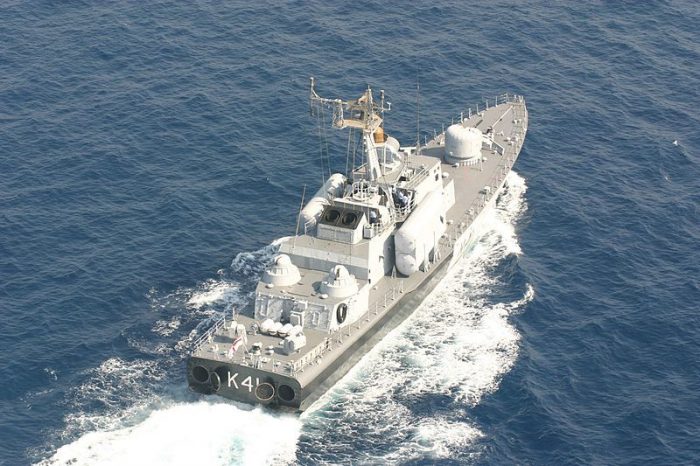 A landing ship is an amphibious warfare ship with a well dock to transport and launch landing craft and amphibious vehicles. Some ships with well decks, also have bow doors to enable them to deliver vehicles directly onto a beach (like a tank landing ship). Modern dock landing ships also operate helicopters.

A ship with a well deck (docking well) can transfer cargo to landing craft in rougher seas than a ship that has to use cranes or a stern ramp.

Landing crafts are small and medium seagoing vessels such as boats, and barges, used to convey a landing force (infantry and vehicles) from the sea to the shore during an amphibious assault. 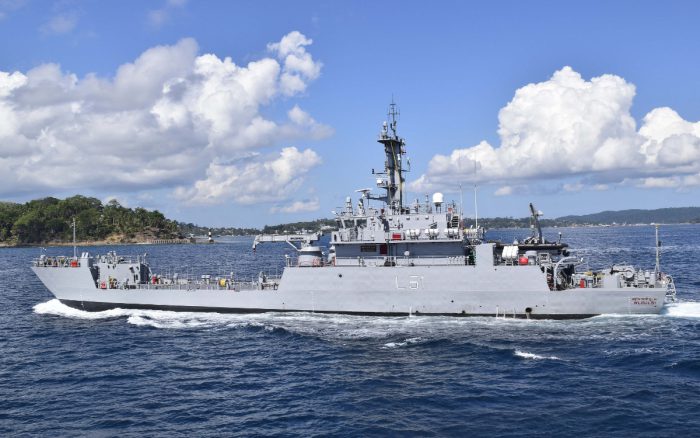 A patrol boat is a relatively small naval vessel generally designed for coastal defence duties. And a Patrol vessel is slightly larger ship used for the same purpose. There have been many designs for patrol boats. They may be operated by a nation’s navy, coast guard, police force or customs and may be intended for marine (blue water) or estuarine or river (“brown water”) environments. They are commonly found engaged in various border protection roles, including anti-smuggling, anti-piracy, fisheries patrols, and immigration law enforcement. They are also often called upon to participate in rescue operations. 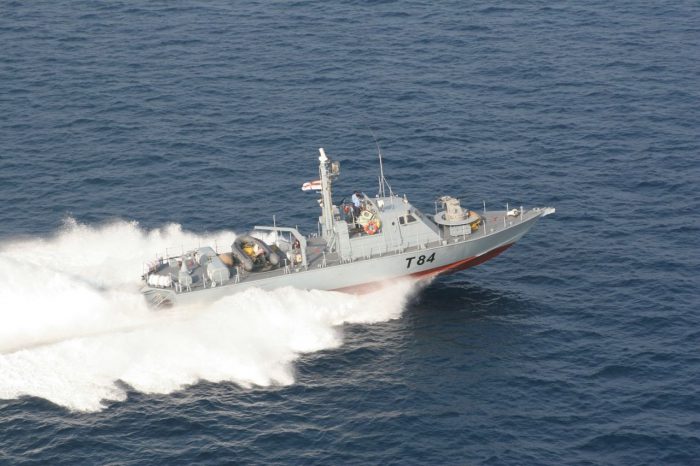 Car Nicobar class is the major Patrol vessels of the Indian Navy. India has 19 Tug Boats. A tug (tugboat or towboat) is a type of vessel that maneuvers other vessels by pushing or pulling them either by direct contact or by means of a tow line. Tugs typically move vessels that either are restricted in their ability to maneuver on their own, such as ships in a crowded harbor or a narrow canal, or those that cannot move by themselves, such as barges, disabled ships, log rafts, or oil platforms. Tugboats are powerful for their size and strongly built, and some are ocean-going. Some tugboats serve as icebreakers or salvage boats. Early tugboats had steam engines, but today most have diesel engines. Many tugboats have firefighting monitors, allowing them to assist in firefighting, especially in harbors. Currently there are 19 patrol vessels, 110 patrol boats and 19 tugboats in service.

Below is a list of Indian Navy Training vessels. 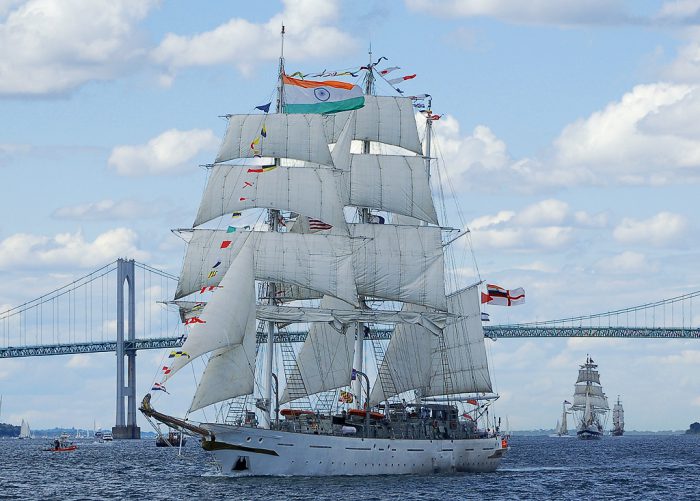 Research vessel is a ship or boat designed, modified, or equipped to carry out research at sea. Research vessels carry out a number of roles. Some of these roles can be combined into a single vessel but others require a dedicated vessel. Currently there are 9 Research and Survey Vessels in Service.

The Indian Naval Air Arm is a branch of Indian Navy which is tasked to provide an aircraft carrier based strike capability, fleet air defence, maritime reconnaissance, and anti-submarine warfare. Flag Officer Naval Aviation at Goa appears to direct the field operations of the air arm. FONA also serves as the Navy’s Flag Officer Goa Area. Indian Navy has both fighter aircrafts like 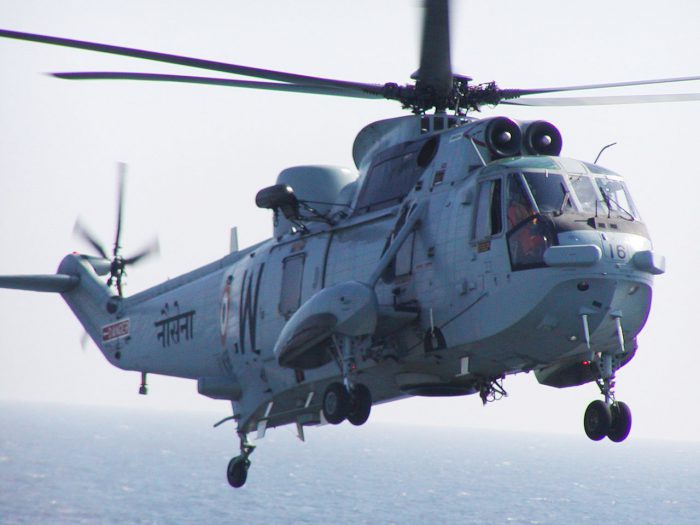 What is Lecturette in SSB Interview? How it is Conducted during GTO Task?

Rivers and its Tributaries Related Information for Defence Exam