CDS II 2017 Cut off – Union Public Service Commission conducted Combined Defence Services Examination on 19th November 2017 which was appeared by lacs of candidates from across the India. All those candidates who have appeared in the examination must be eager to know the expected cut off of CDS-2 2017 examination although the official cut off will be released by the UPSC after sometime.

This year as the question paper was not so tough so one can expect higher cut off than the earlier examination. We can expect around 110 marks for the IMA, 125 for AFA, 105 for NA and 90 for OTA (Men/Women).

UPSC has released the official cut off of previous year CDS examination. It can help the candidates to know about the previous trends of the cut off.

So, here with the help of the above excel you can get to know about the cut off of previous year CDS Examination which can give you clear idea as how much one should score to qualify the written examination of CDS Examination every year.

Here in the above section we got to know about the over-all cut off of CDS examination held previously but there is something which is most important and this is known as sectional cut off. It means candidates are supposed to qualify the minimum cut off in every paper i.e. English, GK &Maths failing which you will not be able to qualify the CDS-2 2017 written examination.

The trend shown above in the above excel gives the detail about the minimum sectional cut off of Previous CDS Examination. As in all the previous examination     UPSC has set the minimum bar of 20% in each subject.

As discussed earlier a candidate is to score minimum of 20 % marks in each paper to qualify the CDS examination. It is expected that this time also it will be 20%.

All the candidates who have appeared in CDS-2 2017 examination are informed that Major Kalshi Classes has already uploaded the answer key of CDS-2 2017 Examination on 19th November 2017.

Candidates can go through the link given-http://blog.majorkalshiclasses.com/cds-2-2017-answer-key-sets-abcd/

After going through the link candidates can verify their responses and can start the preparation for SSB Interview.

All the students who have appeared in CDS-2 2017 Examination are informed that Major Kalshi Classes is the only defence training institute of India which provides video solution for all the defence examination. This time again Major Kalshi Classes is going to present the video solutions of CDS-2 2017 examination by the well qualified and experienced faculty of India. In video solutions students can get to know the explanation of all the questions asked in CDS-2 2017 Examination. They can also asked the questions in the comment section of the video and get all the queries sorted out.

After going through the answer key provided by Major Kalshi Classes candidates will get to know as how many marks they may get in CDS-2 2017 Examination. MKC has provided something which is very new and unique for all the candidates. It is known as Marks Calculator, through this candidates can calculate the final marks which they may get in CDS-2 2017 Examination after which students can start the preparation of SSB Interview which is equally important. 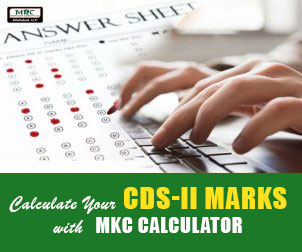 As it is already briefed that UPSC will be releasing the result of CDS-2 2017 Examination soon. SSB Interview will be conducted by the respective Selection centres. The time gap between the SSB interview and the release of result will be very less. Although to be specific ssb interview of IMA/AFA & INA will be conducted in march/april/may and for OTA it will be conducted in june/july/august. So as we are sieng here the time is very limited. So it’s better to start the preparation of SSB interview as soon as possible if a candidate gets marks which are above the cut off marks given in this blog. 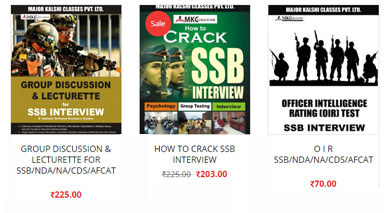 Al though it is the wish of Major Kalshi classes but if you feel that you haven’t did well in the CDS-2 2017 Examination there is no need to worry. Notification for CDS-1 2018 is already out by the UPSC. Students can apply it as soon as possible and can start the preparation which is scheduled on 04th February 2018. So candidates should not waste the time and start the preparations as clearing CDS examination is not so tough but it requires regular and smart study.

MKC provides long term as well as short term courses for CDS Examination. If you want sure success in upcoming CDS Examination they can join MKC which is providing special batch of 45 days and 90 days for the CDS-1 2018 Examination.

For more information candidates can visit-www.majorkalshiclasses.com

We feel that there are some candidates who are good with theirpreparations but their good is not enough to crack the CDS-2 2017 Examination. For such candidates Major Kalshi classes has brought CDS Online series through which candidates can practice the virtual test and can get to know their actual performance.

Major Kalshi Classes is the only defence training of India which has got its own publication which provides study materials for all the renowned examination like NDA/CDS/AFCAT/ACC/TA/CPF/SSB. These books are prepared by the well qualified team of subject specialist who have got vast knowledge along with the years of experience about the examination pattern.