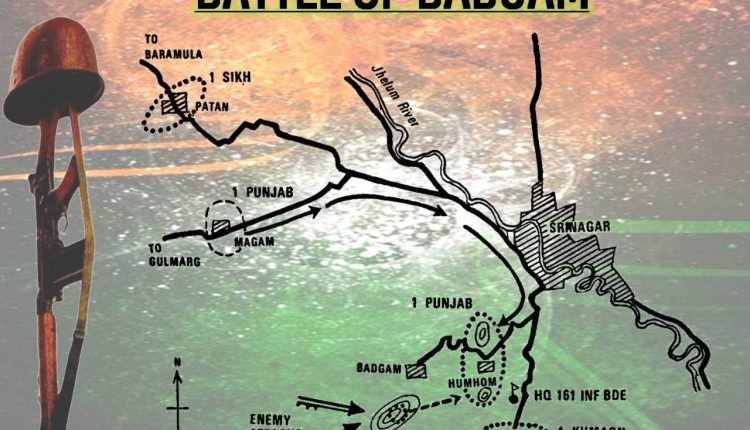 The World’s “Second Largest” and the most” Battle Hardened Armies” in the modern world, the Indian Army is not the Army of 1948 or 1962 where our men fought with PT shoes on their feet in high mountains. Indian Army has evolved itself in a numerable way and it is totally equipped with combat armaments for any battle.

But the history was not as such!

Indian army has displayed unimaginable valor and sacrifice in the early battles and won it for the Indian Army. One such tale of supreme bravery is: Battle of Badgam –

After the participation of India and Pakistan, both countries were first engaged in war in 1947. The Centre of heat was Jammu and Kashmir. The lashkars were advancing along three axes-North of Wularlake, along the main Muzaffarabad-Baramulla-Patan-Srinagar axis, and from Gulmarg. The plan was to seize the airfield and block the induction of Indian troops by air.

At that time, a weak brigade of Indian Soldiers, airlifted from Punjab became the barrier between a group of Lashkars and Srinagar. Indian troops were deployed only at the Srinagar airfield. On 31stOct, the ‘’D” company of the 4th battalion of Kumaon Regiment under the command of Major Somnath Sharma was deployed in Srinagar. During this time, his left hand was having a plaster coat as a result of injuries sustained previously on the hockey field, but he insisted on being with his company in combat and was subsequently given permission to go.

On 3November, a batch of three companies were deployed to the Badgam area on patrol duties. Maj Sharma led the patrol and the objective was to check the infiltrators moving towards Srinagar from the North.

In the process, around 700 Lashkars surrounded the village and Maj Sharma’s company was under heavy fire and bombardment. They were massively outnumbered seven to one, but Maj Sharma knew that the Badgam village was very crucial and loss in their position would make the city of Srinagar and the airport vulnerable. When heavy causalities adversely affected the company’s firing power, Sharma took upon himself the task of distributing ammunition to his men, operating Light Machine Gun (LMG).

While fighting the enemy, a mortar shell exploded near him and he was martyred.

Brig Sen ordered a reorganization of the defenses. 1PUNJAB was ordered to vacate the Magam immediately and fell back to Srinagar.