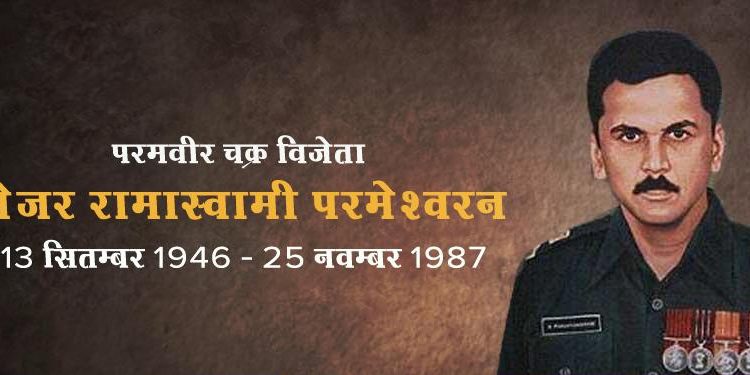 “The true soldier fights not because he hates what is in the front of him, but because he loves what is behind him”. Today we shall know the heroic saga of one such hero of Indian Army- Major Ramaswamy  Parmeswaran .

Son of Mr. KS Ramaswamy and Mrs.Janaki, Major Parmeswaran was born on 13 sept.1946 in Bombay,Maharastra. After completing his initial education as well as higher studies from SIES (South Indian Education Society), High School,Mumbai in 1963.He joined the OTA Chennai and passed out on June16,1972. He was commissioned into 15 Mahar of prominent Mahar Regiment of Indian Army .He was in service of the regiment for glorious Eight years. He was later transferred to serve with 5 Mahar Battalion in 1983.During his service with both the 15 Mahar’s and the 5 Mahar battalion, Major Parmeswaran participated in good number of counter-insurgency operations in the North East region. Because of his great leadership skills, Major Parmeswaran was nicknamed”Parry Sahib”by his fellowones . He was subsequently granted a regular commission,and was promoted to captain rank on 12Oct.1979 and to Major on 13 July,1984. When Operation Pawan was launched Major Parmeshwaran was handpicked to serve with and Mahar Battalion, one of the first units to land in Sri Lanka in 1987.

Major Parmeswaran was serving in the unit which was a part of 54 Infantry Divison and was deployed in Sri Lanka then. After the instauration of Indian Army in Sri Lanka in Aug1987, the Militants were supposed to down their weapons. But the LTTE backed out and discharged actions on Indian forces. On the night of 25November 1987,While conducting a search operation the armymen got engaged in firing with militants . Major Parmeswaran didn’t lose the control and quickly tackled the situation. His braveheart decided to launch a counter-ambush to save his soldiers. Without concerning for his own safety, Major Parmeswaran dropped on his stomach and continued to crawl forward through the coconut grove in the direction of ambush. His men faced heavy firing from a HMG (Heavy Machine Gun).Undeterrely, Major Parmeswaran charged at the militant and shot him down. Unfortunately, another HMG burst him in the chest. But the mighty soldier did not let the pain overcome him. Even he was slowly going into the deathbed he kept giving orders to his soldiers. The ambush was finally over and 5 militants were killed in the attack. His soldiers though were shocked by the loss of their gritty commander but also got inspired and succeeded in beating back the militants.

Major Parmeswaran was given the nation’s highest gallantry award “Param  Vir Chakra” for his courage, invincible fighting spirit and balidaan . He becomes the sole recipient of PVC award from the IPKF operations in Sri Lanka and the first from OTA Chennai to get the coveted award. He is also the lone Mahar Regiment soldier to be conferred with the Param Vir Chakra.