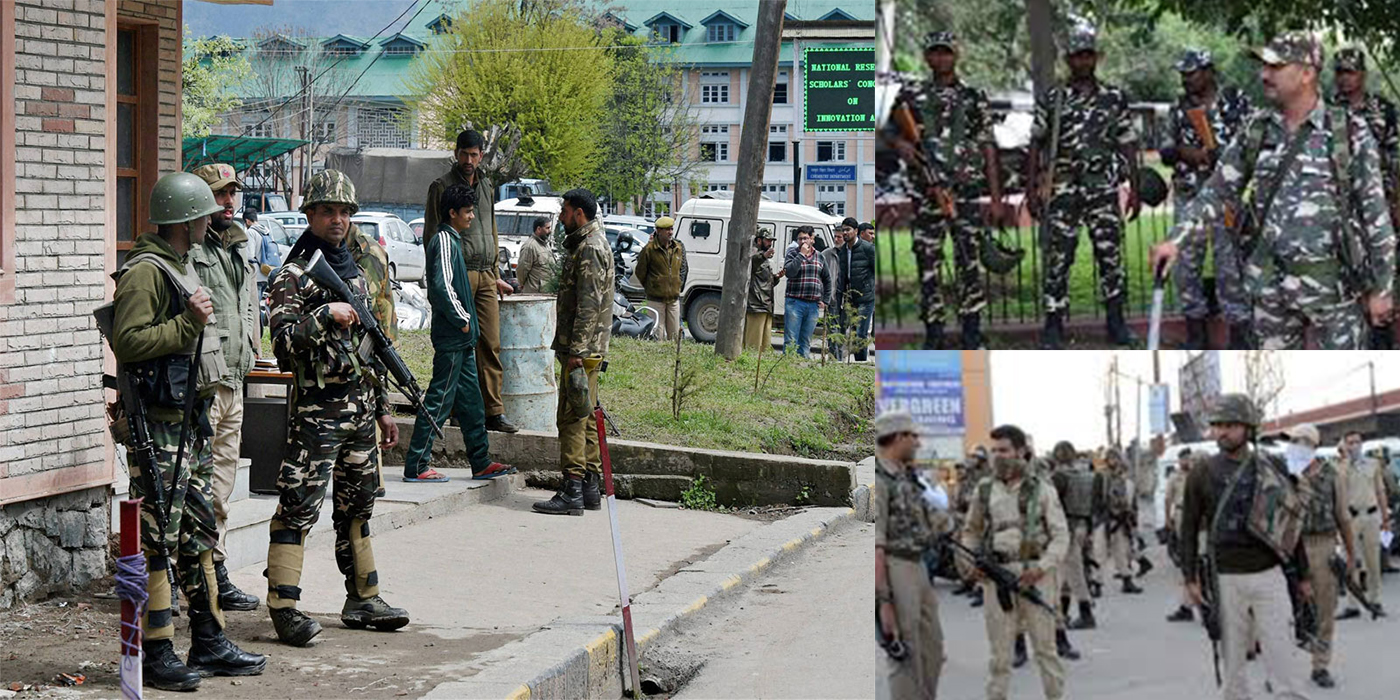 The Border Security Force (BSF) is the primary border Defence organization of India. It is one of the five Central Armed Police Forces of the Union of India; it was raised in the wake of the 1965 War on 1 December 1965, “for ensuring the security of the borders of India and for matters connected there with”.

The BSF has its own cadre of officers but its head, designated as a Director-General (DG), since its raising has been an officer from the Indian Police Service. It is an Armed Force of the Union of India tasked with various assignments from time to time. It currently stands as the world’s largest border guarding force. BSF has been termed as the First Line of Defence of Indian Territories.

The Central Reserve Police Force (CRPF) is the largest of India’s Central Armed Police Forces. It functions under the aegis of Ministry of Home Affairs (MHA) of the Government of India. The CRPF’s primary role lies in assisting the State/Union Territories in police operations to maintain law and order and counter insurgency. It came into existence as the Crown Representative’s Police on 27 July 1939. After Indian Independence, it became the Central Reserve Police Force on enactment of the CRPF Act on 28 December 1949.

With 239 battalions and various other establishments, the CRPF is considered India’s largest paramilitary force and has a sanctioned strength of 313,678 personnel.

Set-up in 1963, Central Bureau of Investigation (CBI) is the premier investigating agency of India. Operating under the jurisdiction of the Ministry of Personnel, Public Grievances and Pensions, the agency has been known to investigate several economic crimes, special crimes, and cases of corruption with other high-profile cases. The CBI headquarters are located at Jawaharlal Nehru Stadium in New Delhi.

The Central Industrial Security Force (CISF) was set up under an Act of the Parliament of India on 10 March 1969 with a strength of 2,800. CISF was subsequently made an armed force of the Republic of India by another Act of Parliament passed on 15 June 1983. Its current active strength is 148,371 personnel. Among its duties are guarding sensitive governmental buildings, the Delhi Metro, and providing airport security.  It is directly under the Union Ministry of Home Affairs and its headquarters are at New Delhi.

The CISF provides security cover to 300 industrial units, government infrastructure projects and facilities and establishments located all over India.

CISF plays a major role in Disaster Management, for Disaster Management course the personnel are trained from NISA, Hyderabad. Another unique thing which the CISF has is a Fire Wing which helps during fire accidents in Industries where CISF is on guard.

The Indo-Tibetan Border Police (ITBP) is one of the five Central Armed Police Forces of India, raised on 24 October 1962, under the CRPF Act, in the wake of the Sino-Indian War of 1962. The ITBP was intended for deployment along India’s border with Tibet.

In September 1996, the Parliament of India enacted the “Indo-Tibetan Border Police Force Act, 1992” to “provide for the constitution and regulation” of the ITBP “for ensuring the security of the borders of India and for matters connected therewith”. The first head of the ITBP, designated Inspector General, was Balbir Singh, a police officer previously belonging to the Intelligence Bureau. The ITBP, which started with 4 battalions, has since restructuring in 1978 has undergone expansion to a force of 60 Battalions with 15 Sectors and 05 Frontiers as of 2018 with a sanctioned strength of 89,432.

The Indian Coast Guard (ICG) protects India’s maritime interests and enforces maritime law, with jurisdiction over the territorial waters of India, including its contiguous zone and exclusive economic zone. The Indian Coast Guard was formally established on 18 August 1978 by the Coast Guard Act, 1978 of the Parliament of India as an independent armed force of India. It operates under the Ministry of Defence.

The National Security Guard (NSG) is an Indian Special Forces unit under the Ministry of Home Affairs (MHA). It was raised in 1984, following Operation Blue Star and the assassination of Indira Gandhi, for combating terrorist activities with a view to protect states against internal disturbances”.

NSG is under the authority of Ministry of Home Affairs. However it is not categorized under the uniform nomenclature of Central Armed Police Forces. It has a Special Forces mandate, and its core operational capability is provided by the Special Action Group (SAG) which is drawn from the Indian Army. The Special Rangers Group (SRG), the police component of NSG, which also handles VIP security, is composed of personnel on deputation from other Central Armed Police Forces and State Police Forces.

The NSG personnel are often referred to in the media as Black Cats because of the black outfit and black cat insignia worn on their uniform.

The National Cadet Corps in India is a voluntary organization which recruits cadets from high schools, colleges and universities all over the India. The Cadets are given basic military training in small arms and parades. The officers and cadets have no liability for active military service once they complete their course.

The Rapid Action Force (RAF) is a specialized wing of the Indian CRPF (Central Reserve Police Force) to deal with riot and crowd control situations. RAF was raised on 11 December 1991 with headquarters in New Delhi. It became fully operational on 7 October 1992, to deal with riots, riot like situations, crowd control, rescue and relief operations, and related unrest.

The first five battalions were raised by October 1992 and an additional 5 battalions were added in April 1994. On October 2003, with 11 years of service, the force was presented with the President’s colors. On 9 November 2013, the RAF Academy of Public Order was established in Meerut, Uttar Pradesh. In 2017, the Indian government approved an additional five battalions to be based in New Delhi, Haryana, Rajasthan, Uttar Pradesh and Bihar.

Established in 1948, The Indian Territorial Army (TA) is a second line of Defence after the Regular Indian Army; it is not a profession, occupation or a source of employment. It is only meant for those people who are already in mainstay civilian professions; in fact, gainful employment or self-employment in a civil profession is a prerequisite for joining the Territorial Army.

Volunteers of the Territorial Army usually serve in uniform for a few days every year, so that they can bear arms for national Defence in times of dire need or national emergencies.

We hope that this article should’ve provided you with great details about Paramilitary and Other Reserved Forces.