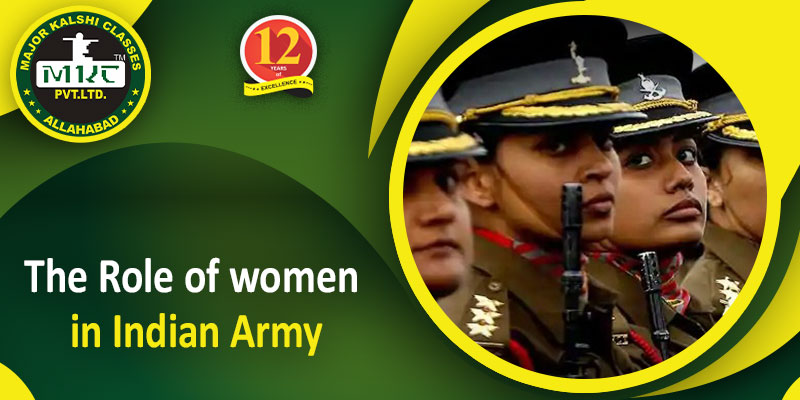 The Role of Women in Indian Army

Indian women are leading the world in all sectors. Whether it’s a business field, entertainment field or the raging battle field, women have captured the powers of each and every field bravely and beautifully.  According to the statisticsit’s calculated from data, Indian Army consists of about 2.65% women officers, Indian Navy have 3.1% of all women commissioned and non-commissioned officer and about 7% Women officers are there in Indian Air Force. There is an unquestionable integrity that Indian Army women are displaying towards the defence of country.

Indian Army women are accepting the wicked challenges in the battlefield, then why the other women in Society are left behind the race in reining the world with their uncontrollable power and energy.

People often argue that as women are battling and winning the other sectors of globalised world, how they can be a part of a battle field. When women are not lagging behind in any field, why would be the title of Reigning queen be taken away from the Indian Army women.  Army General too believes that Women are capable of performing well in the Battle. Countries like Germany, Australia, Canada, The US, Britain, Denmark, Finland, France, Norway, Sweden and Israel have already proved the power of women by allowing them to win their own battles through Combat roles.

Indian Army Chief General too has stated their faith in Indian Army women by starting the recruitment of Women in Indian military as Military power jawans. By getting influenced from the other Countries, Indian army has also started recruiting women in several combat positions.

In early 90’s where women were only recruited In Non-medical roles.  Then, slowly and steadily Indian army started commissioning Women to join Indian Army. Indian Army women such as Mitali Madhumita (Lieutenant Colonel), commissioned in 2000, is the first woman officer in India to receive a gallantry award  for her undisputable courage shown during the Attack on the Indian embassy in Kabul in 2010.

Indian Air Force too started inducting women in all roles, including combat and support roles. In 1994, women joined the air force as pilots in support role. Gunjan Saxena was the first women to fly support sorties in a combat zone during Kargil War in 1999. Deepika Misra became first IAF woman pilot to train for the helicopter aerobatic team. In 2012, Nivedita Choudhary became the first woman from the Indian Air Force to reach the Mount Everest. Dr. Punita Arora is the first woman in the India Navy to reach the second highest rank as the Lieutenant General and First female vice admiral.Dr. Seema Rao Who is well known as “India’s Wonder Woman”, is India’s first woman commando trainer, who has trained over 15,000 Special Forces of India. These Indian Army women have set great examples for other women as well who can blaze their normal lives into fiery battlefields.

We hope that this blog provides you with all the required details about the Role of Women in Indian Army. If you are a candidate preparing for Defence Forces, avail the Best Books or Study Material from MKC Publications. For further inquiry, feel free to call us on +91 9696330033/9696220022 or