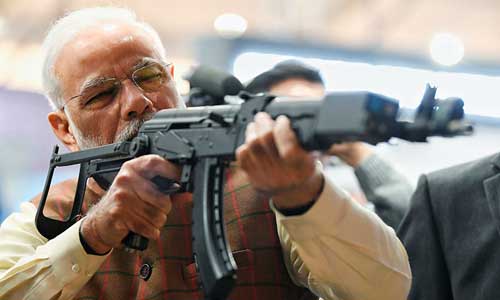 A New India: From Defence Buyer to Defence Exporter

India an isolated military power for a long time has always sought help from the other friendly countries in the time of war or when in the need of defence systems. But now India is changing its boots from a buyer nation to not only a developer nation but also an exporter. India is spending 2.1% of its GDP on the defence budget. And a major part of it comes through the exportation of defence systems. The “ATMANIRBHAR” Bharat plan of the government states the policy of indigenously developing the defence weapons in the nation and for the weapon. India is currently working on a number of indigenous defence projects which will certainly uphold the militia power of India n the world.  India domestically produces only 45% to 50% of defence products it uses, and the rest are imported. India’s military-industrial complex has had little success and only recently the private sector was allowed to enter the defence production.

India is planning to export a number of defence systems to the friendly nations. India has come out with a list of a total of 152 items which would be available for exportation. India is planning to expand its 11 billion defence base to 25 billion by the year 2025 with a 5 dollar billion defence export component. The list, including 85 kinds of equipment and 47 sub-systems, has been curated to meet the needs of the countries in the Indian Ocean Region and Africa — some of the top items featured on it are the Brahmos supersonic cruise missiles, the Advanced Towed Artillery Gun System (ATAGS), Pinaka multi-barrel rocket launchers and the combat Management system. The most interest has been the Light Combat Aircraft Tejas, helicopters and missile systems.

This exportation of defence items will promote Indian Holders with interactions with their foreign counterparts, and also keep an eye out for possible tenders.

Although there are several items in the list but some major items are :

This exportation list certainly shows the growth of interest of other nations in Indian Defence systems and in the future, will help India to make its position stronger in the world militia.

India may have been able to pass the $1 billion mark in defence exports through incremental changes and minor policy reforms but to now move up to $5 billion and beyond will require a much more comprehensive approach. Managing military procurement, production and development need greater attention than ever before, not just to secure India’s future position as a major exporter, but also to enable modernisation in a period of economic uncertainty and flat budgetary growth.

10 Special Things You Get Only in the Indian Defence Services