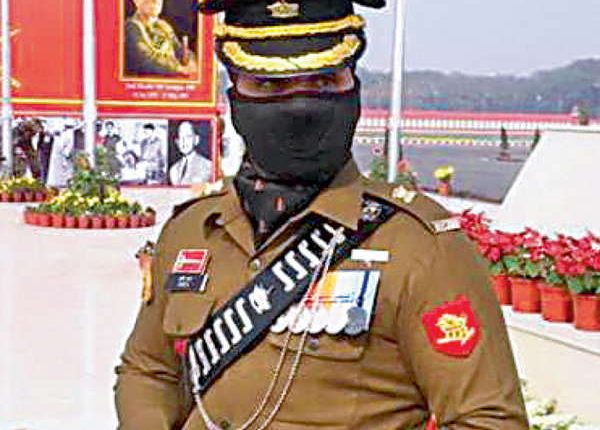 “Indian Army” — When we utter these two words, our heads get down with respect and gratitude to their sacrifice and nobility. From the icy terrain of Himalaya to the scorching heat of desert, they guard us as their family all day and night without complaining.

Despite suffering grave injuries, some of which they know they will never recover from, they continue serving their country with utmost courage and bravery. One such story is of Major Rishi Nair.

Hailing straight down from Kerala, Major Rishi is a part of 42 Rashtriya Rifles. His act of valour had kept the valley quiet and brought from militants and stonepelters.

Pulwama and other areas of the valley are hotbed for the militants and they have been very good at influencing the youths. In 2017, militancy was at very peak.

Maj Rishi played a crucial role in turbulent Tral area in the Valley after the unrest last year and led several successful operations against militants, busting their hideouts in Jammu and Kashmir. In 2017, Maj Rishi was leading a operation against two hardcore militants named Aquib and Lashkar-e-Toiba militant Farsan. Maj Rishi led the operation on the Tral Sector. The army got the tip that the two militants were hidden in a house .

Maj Rishi was the first one to reach the scene to hunt the militants and it was his quick thinking and courage that luck favored the day for the army.Tral has produced terrorists like Burhaanwani, after deployment of Maj rishi and his company escape for the militants was next to impossible. Aquib was the longest -surviving militant in the area and was in the radar of the army. On the operation day, the troops had occupied a tactical advantageous place and aimed at the terrorists. They then started the process to plant explosives in the house to make the terrorists reveal their positions. Maj Rishi being the leader took the initiative and moved into the house himself for the task.

“He moved in first to plant the Improvised Explosive Device (IED) to bring the house down. This is considered to be the most dangerous and challenging job in an  operation. He led his very professional Quick Response Team into the firefight, placed the IED and blew up a portion of the house” . Due to the first explosion, terrorists retreated back into the corner of the house and it gave the army and police to corner them more in the house .Then, the gun battle took place and it continued for several hours. But,it was the need of hour for the troops to blow the rest part of the house . The Major again step forward and entered the house to place another IED.

While returning after planting the IED, Maj Rishi saw a better position and decided to place the bombs there as it would cause more damage to the loss . As soon as he planted the bomb,  he was at the point blank range for the terrorists and the terrorist didn’t missed it . One of the terrorist opened fire at him and a bullet hit directly on Rishi’s face, knocking off his nose and badly damaging his cheek bone and jaw. But, the soldier didn’t care of his own and used his AK-47 rifle to shred the terrorist in the quick moment before escaping outside safely . Maj Rishi was left with a nose -less face .Then, he crawled out and led his QRT away. The RMO quickly patched him up and sent him to the hospital where surgeons laboured over him through the night. The 16-hour pitched gunfight ended with the death of the two terrorists in March 2017, leaving the Major with forever gallant nose-less face.

Maj Rishi was responsible for bringing in peace and stability to a great extent when Kashmir was burning over Burhan’s Wani’s death.

“His ability to speak and make friends with everybody resulted in him making many friends among locals notorious for spitting on patrols in the area? after Burhan’s elimination, the area under him was the quietest with no stones thrown,”. Local peoples of the valley used to call him “Khan Sahib”.

For his gallant action, IC-72692W Maj Rishi R, Mech Inf, 42 RR was bestowed upon with Sena Medal for Gallantry on the Independence Day of 2017. Such bravery and courage is in the blood of every soldier of Indian Armed Forces and Army is woking every hour to prove it right .