Indian Armed Forces are divided into three parts i.e Indian Army, Navy, and Airforce. Below we are going to list all the commands and its headquarters of the Indian Armed forces-

The Indian Army has divided administratively into seven tactical commands. Each Command is under the control of the Lieutenant general.

Indian Navy plays a vital role in protecting the Indian Sea and ensure the safety of fellow Indians from any attack through the Sea.

Indian navy has three commands and each command is headed by a flag officer commanding-in-chief with the rank of vice admiral.

The Indian Air Force is divided into five operational and two functional commands. Each command is headed by an air officer commanding-in-chief with the rank of air marshal.

This is all about the Headquarters of the Indian Army, Navy, and Airforce. If you guys want to serve the nation and want to clear the Defence examination, join Major Kalshi Classes, Here we have experienced faculty for all the subjects. For more inquiries, you can call us at 9696220022 and 9696330033 or go to our official website www.majorkalshiclasses.com. Thank you. 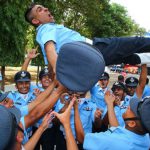