Union public service commission UPSC conducts examination for CAPF Central Armed Police Forces for Assistant Commanded. It is one of the biggest exam conducted by UPSC, approx 10 lakh candidate appears in this exam Union Public Service Commission CAPF AC Exam will be held on 23rd June 2017 after written exam UPSC will officially give CPF 2017 cutoff marks. Candidate can apply for 179 Vacancies in UPSC Board. The candidates can get recommended for appointment in the posts of Assistant Commandants (Group A) in the Central Armed Police Forces viz.

The board will release the official UPSC CPF Cut off Marks 2017 on its official site. www.upsc.gov.in

For the sake of applicants we are providing last year cutoff marks for your perusal, with taking this as reference you can make strategies and proper planning for upcoming exam. Candidates have complete one month for polishing up their preparation. You can purchase CPF books from mkcpublication house that will surely help you while doing preparation.

Expected cutoff marks generated by Major Kalshi Classes Pvt. Ltd.  For CAPF examination in 2017 in paper –I and Paper-II are given below, this will be not considered as fixed and officially true because final outcome will be given by UPSC.

Candidates can take reference for these and then do preparation accordingly to clear the examination criteria:

Cutoff marks in paper-I and Paper-II combine for clearing exam are:

**Those who are Ex-service man from Armed Forces. 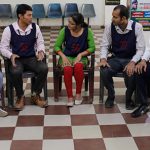 MNS 2020 Result out, Check out the MNS Cutoff Marks