Who is the first woman parade adjutant for the Republic Day parade in India?

Notes:
The birth anniversary of the tenth Sikh Guru, Guru Gobind Singh was celebrated across the country and many parts of the world on January 2, 2020. The birth anniversary of a Sikh Guru is also called as “Prakash Parv”. As per the traditional Sikh calendar (Nanakshahi) , birthday of Guru Gobind Singh falls on January 2, this year (Though he was born on 5 January 1666 by Gregorian Calendar). Guru Gobind Singh was named as the tenth Sikh guru, at the age of 9, after the ninth Guru and his father Guru Teg Bahadur was killed.

Correct Answer: A [Right to life]

Notes:
As per Supreme Court judgments, the “right to education” flows from the “enforceable right to life and personal liberty” guaranteed by the Constitution under Article 21. This is because there can not be a dignified life or realisation of other rights of the person if he / she has no adequate education.

Notes:
The major function of the Cabinet Committee on Economic Affairs (CCEA)is to review economic trends on a continuous basis, as also the problems and prospects, with a view to evolving a consistent and integrated economic policy framework for the country. It also directs and coordinates all policies and activities in the economic field including foreign investment that require policy decisions at the highest level. The Cabinet Committee on Economic Affairs (CCEA) headed by Prime minster.

Abhijit Banerjee was awarded the Nobel Memorial Prize in Economic Sciences in 2019 along with his two co-researchers Esther Duflo and Michael Kremer “for their experimental approach to alleviating global poverty”.

B- Yoga for Health – Yoga at Home

Explanation:  International Yoga Day 2020 Date, Theme: Due to social distancing measures adopted by most countries, the theme set by United Nations for this year is “Yoga for Health – Yoga at Home”.

Explanation :  DefExpo, a flagship biennial event of the Ministry of Defence, is being held for the first time in Lucknow (Uttar Pradesh) from 5th to 9th February 2020. This is the 11th edition of DefExpo – a mega defence exhibition. The main theme of the DefExpo India- 2020 is ‘India: The Emerging Defence Manufacturing Hub’ and the focus will be on ‘Digital Transformation of Defence’.

A- An Era of Darkness: The British Empire in India

Answer ( A) An Era of Darkness: The British Empire in India

Explanation : In 2019, Shashi Tharoor received the Sahitya Academy Award for his book ‘An Era of Darkness’ in a non-fiction category in English language. He is a M.P from Kerala and belongs to Indian National Congress Party.

Explanation: The 1st edition of the 2020 Khelo India University Games (KIUG) was held from February 22 – March 1, 2020 at KIIT University (Kalinga Institute of Industrial Technology University) in Bhubaneswar,Odisha. Punjab University tops in this event.

This is an official App of Major Kalshi Classes Pvt. Ltd for defence aspirants and highly recommended for all defence lovers.
Major Kalshi Classes is a renowned Educational institute located in Prayagraj.As is well known to all We have been providing quality education for defence recruitments for the past 13 years and over 5000+ students have been selected at various post since its inception in 2008. 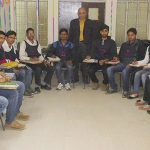 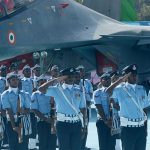 The Ultimate Revelation of Top Air Force Academy in MP