Agniveers Given In Principle Approval For 10 PC Quota in CAPF 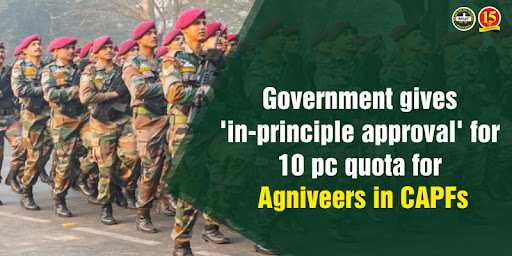 Agnipath entry scheme has been in news for both its positive and negative aspects. Where everybody is questioning what are they going to do after four years of service. The Agniveers will be given a quota in Central Armed Police Forces commonly known as CAPF.

It was already announced that 25 percent of Agniveers from each batch will be offered permanent or short service commission in the Indian Army, Navy, and the Air Force.

The agniveers will be given a reservation of 10 percent in the CAPF recruitment after their four years of service. The age limit for agnipath entry is 17.5 years to 23 years for this year and later on, it will be reduced to 21 years. It will be sufficient for the CAPF recruits hence the quota has been given in-principle approval.

Although, the government of India has given a 10 percent quota to the forces like CRPF and BSF under CAPF to the agniveers after they are released from their four years of service. Rajya Sabha was informed about this recently. Nityanand Rai, Union Minister of State for the home said that approximately 30 lakh candidates have appeared against 60 thousand constable posts in the CAPF.

The quota in CAPF is given against the post of general duty constables, riflemen, and Assam rifles. There are other benefits also given to the agniveers like relaxation in the upper age limit. Agniveers will also be given exemption in the physical efficiency tests.

Therefore, it will be a relief to those who were protesting against the agnipath entry scheme as they were in a dilemma after four years. Well, there is a solution to every problem. Even the paramilitary forces are expected to have some reservations for the Agniveers.

It was also discussed that out of 56,105 selected candidates, offer letters were issued to 55.047 candidates. Others were left because of various issues like a mismatch of bio-metrics, verification of the permanent resident certificates, and caste certificate.

Lastly, now let us discuss some of the reasons why MKC is the best NDA coaching in Allahabad.

They also prepare students for the CDS, MNS, AFCAT, TES Army Entry, and 10+2 B.Tech Navy Entry. Hence, some of the features that make MKC the best are as follows: